Starting out with a full pack and a big smile.

I’m camped at Little Yosemite Valley [LYV], in a backpacker campground. I left Happy Isles with Russell around 7:20 am, and he accompanied me to the 1 mile marker, where there’s a bathroom & potable water. We ate breakfast together, and I took off. The hike up JMT was fairly easy, and I got to LYV around 11 am. There’s a troop of boy scouts camped next to me — the troop leaders are being friendly & helpful.

Since I got in so easy, I decided to hike Half Dome. The hike was fine until the Sub-dome, when it got harder — lots of uneven stairs. The cables terrified me on the way up. I had to talk myself out of quitting or puking. It was such a relief to get to the top. The views were spectacular. I heard a rattlesnake. 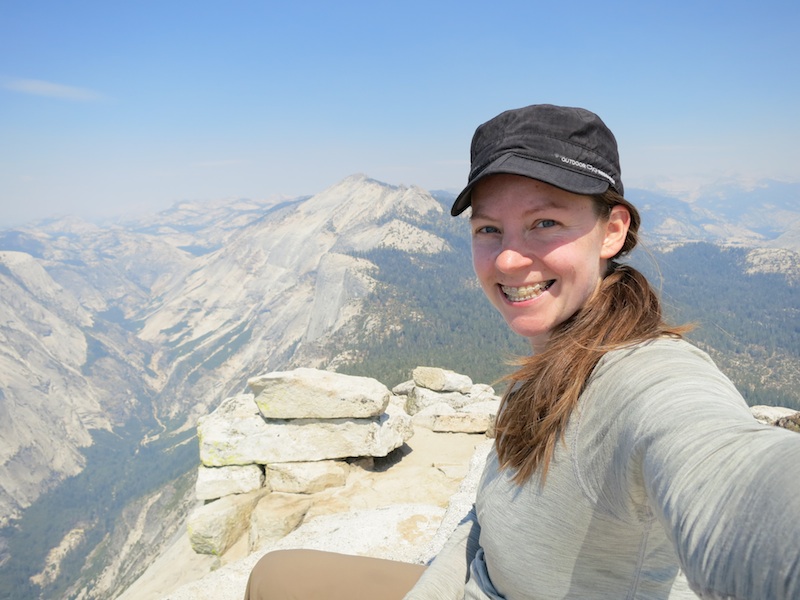 On top of Half Dome, with haze from a forest fire in the background.

The climb down was easy in comparison. I walked down backwards on the left cable, moving my hands to lower myself. The timing was good, as it wasn’t crowded on the way down.

I started getting a headache in camp, and eating didn’t help. I made couscous, and could only finish half. I dumped the rest in the composting toilet. I managed to wash my dishes, do my laundry, and refill water. 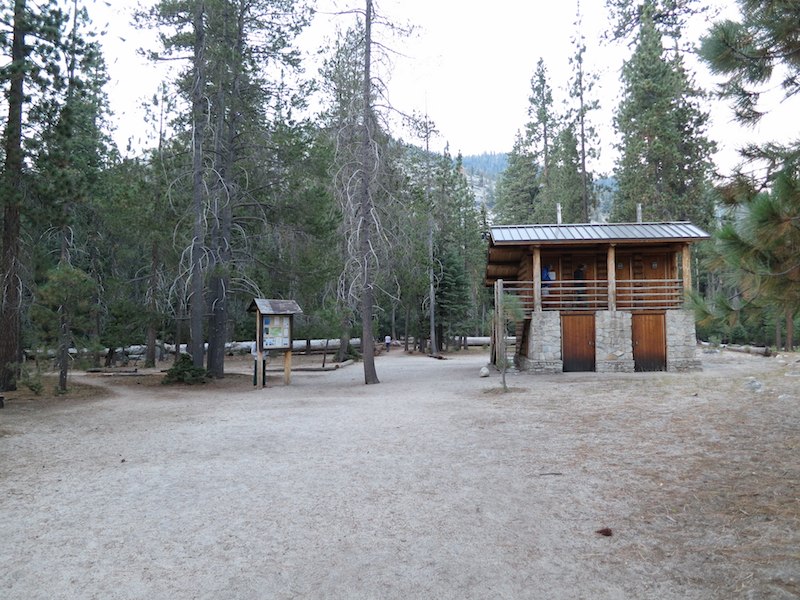 The composting toilet at Little Yosemite Valley — the cadillac of backcountry toilets.

It’s around 8 maybe, dusk time, and I feel bone tired. The boy scouts are getting up at 5:30 [am] and I hope their noise wakes me.

Body: no kidney twinges, had a calf cramp on the cables going up Half Dome

I remember that first day being sneaky-hard. I actually took my only fall on the whole trail shortly after Nevada Falls. Of course someone was there to see it – a friendly day hiker who looked concerned. I shook it off and kept going. I had requested a permit to go all the way through to Sunrise Creek for the first night’s camping, but only got a permit for as far as LYV. Not sure why that is, as LYV seems more desirable (swanky toilet — best on the trail, and closer = easier first day, especially if you want to do Half Dome).

Poor Russell got a few dirty looks from other hikers on that one mile stretch of trail — I had a full backpack and he had none. Judgey-judgey! It was hard to say goodbye, as we’d just been apart for 3 months, but I knew I would see him again in 10 days.

With my incredible partner Russell about to start the hike.

I down-played in my journal how frightened I was going up Half Dome. I have a considerable fear of heights that I generally try to ignore; I like the views from the top of tall things though, so didn’t want to pass the chance to do the climb. I think I hadn’t eaten enough before tackling the climb — hence the nasty calf cramp right before finishing. Thank goodness I was on the almost-horizontal stretch right before the cables ended; I imagine it could have been substantially more dangerous on the almost vertical sections.

There was a pile of used gloves next to the base of the cables, and I grabbed a pair of gardening gloves before heading up. The climb is basically hauling yourself up with arm strength — lots of pressure on the hands — so the skin on my palms and I are very glad I did this. My shoes were a terrible fit for the climb — light trail runners with minimal tread. They were great for me for the rest of trail, but they made climbing up slick granite pretty darn nerve-wracking.

Later down the trail, I learned that a lot of people found climbing down scarier than up. Guess everyone is different in what scares them. I forced myself to look nowhere but the stone wall in front of me as I descended, and that worked for me. 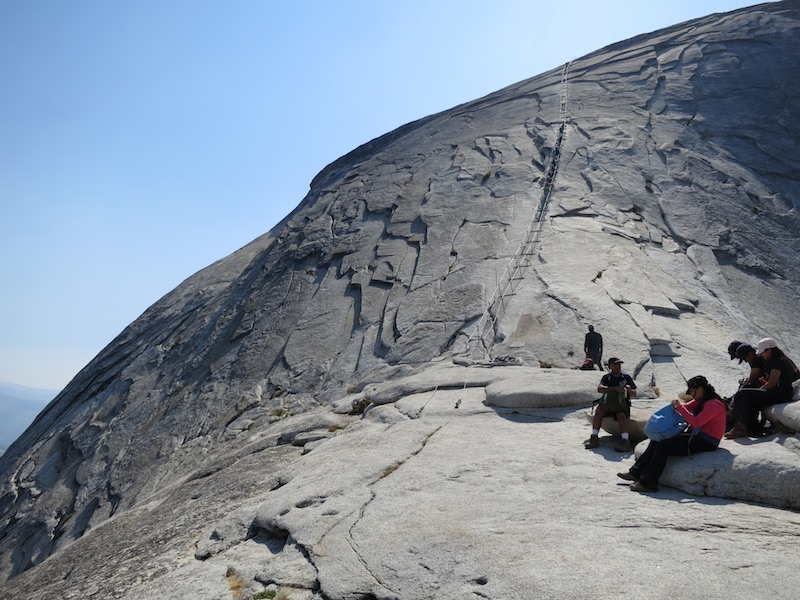 The infamous Half Dome cables.

I would guess now that the headache post-Half Dome was some combination of fatigue and altitude adjustment. Happy Isles is at 4035′, the top of Half Dome is 8836′, and I camped at 6140′, so I would have been surprised if I’d felt nothing from all the elevation gain. I had a headache the first night out on the 2012 section hike too. This was the only apparent affect of the altitude I noticed the whole hike.