Every night on the John Muir Trail (JMT), I wrote in a journal to record experiences and basic stats — how far I went each day, where I camped, and who I met. I will post day by day excerpts from that journal, but first, some background. If you aren’t familiar with the JMT hike, this post should get you up to speed on the planning involved before I jump into mileage, blisters, and mountain passes. 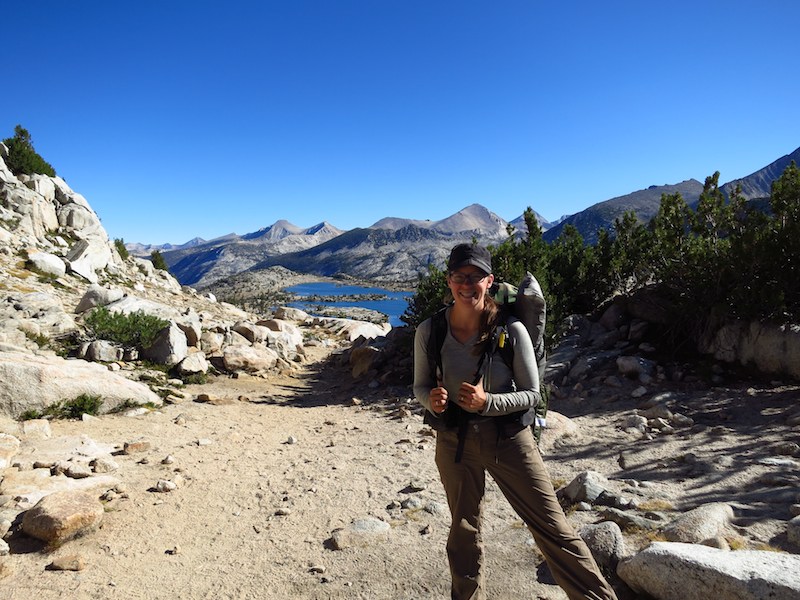 On top of Selden Pass, looking back north to Marie Lake.

I used to be intimidated by backpacking. It felt like something other people did — people who Had Gear, and Knew Things. I had running shoes and jeans, and no clue how to read a compass.

That first week-long High Sierra trip in 2012 was an initiation of sorts for me, and it changed everything. Did it make me an expert? Ha ha — NO. What it did was show me the elements of planning a trip, and expose me to a wide variety of real-life methods and experiences on the trail. Going into my 2013 trip, I felt confident that, with my friend Mr. Google, I would figure it out.

Hiking the JMT requires a permit, and I had two options for getting one: requesting a permit six months before my start date, or waiting in line two days before my start date for one of the first-come-first-served permits. In January 2013, snow levels were ~150% of normal, so I planned to hike later in the summer, and applied for an early August start date. It turned out that all the snow for the season came early, and it ended up being a low snow year, so I didn’t need to start that late; it worked out fine though.

The previous year, our 4 person group had covered about 10 miles a day, and I used that number to plan my solo trip. I didn’t plan where I was going to camp each night,  just when I expected to resupply food, and when and where I was meeting Russell half-way through (Day 11 at Muir Trail Ranch on the east end of Lake Florence). I found myself going farther each day than I expected, and had a few extra days but no flexibility to go faster before my meet up with Russell. 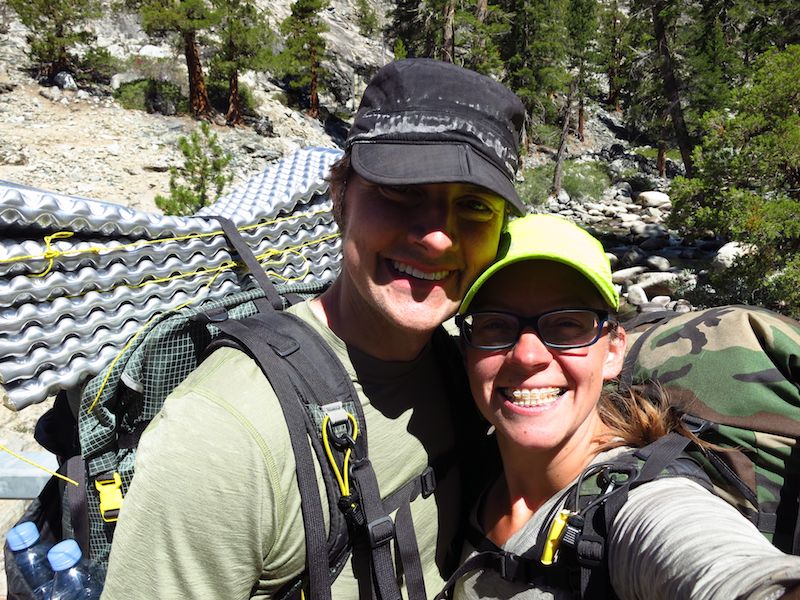 Russell and I hiking out from Muir Trail Ranch.

Before the hike, I packed up bags and boxes of food (Snickers, couscous with soup mixes, foil packets of tuna, more Snickers, dried fruit, and more nuts than I wanted to eat), and instructed Russell on what to bring with him when he met me. I ended up carrying way too much food for the first part of the hike, and giving a lot away to other hikers at Devil’s Postpile.

I had found on the 2012 hike that I was uninterested in spending time on food prep while on the trail, so planned only one hot meal a day. For much of the hike, I would get up and walk for an hour or so before eating breakfast.  This let me get of camp quickly and stumble down the trail long enough to fully wake up before asking my stomach to work. Near the end of the hike, when we were climbing 3000 feet before lunch, I needed the energy from breakfast and would only hike 15 or 30 minutes before eating.

Before my 2012 section hike, the only hiking gear I owned was a 4 lb tent. I had no backpack, no sleeping bag, no stove or cooking pots, no hiking shoes. I acquired a full kit for that trip, largely lightweight gear from small cottage manufacturers, but also enough from REI to get an embarrassingly large dividend. For the 2013 hike, I used my 2012 gear with just a few changes:  a Tarptent Double Rainbow, a ULA Circuit internal frame backpack, a Katabatic Palisade 30° quilt, a chopped-down Thermarest Z-lite, an MSR Pocket Rocket canister stove with the .85L Titan Kettle, a Sawyer Squeeze water filter, and other small stuff. My complete gear list for 2013 is here.

My base weight (loaded pack minus food & water) was around 16 lbs with the two-person tarp-tent; my heaviest load was about 30 lbs with 10 days of food heading out of Muir Trail Ranch. For the most part, I didn’t notice the weight on my back. The first few days with 10 days of food were noticeably harder, though still doable. 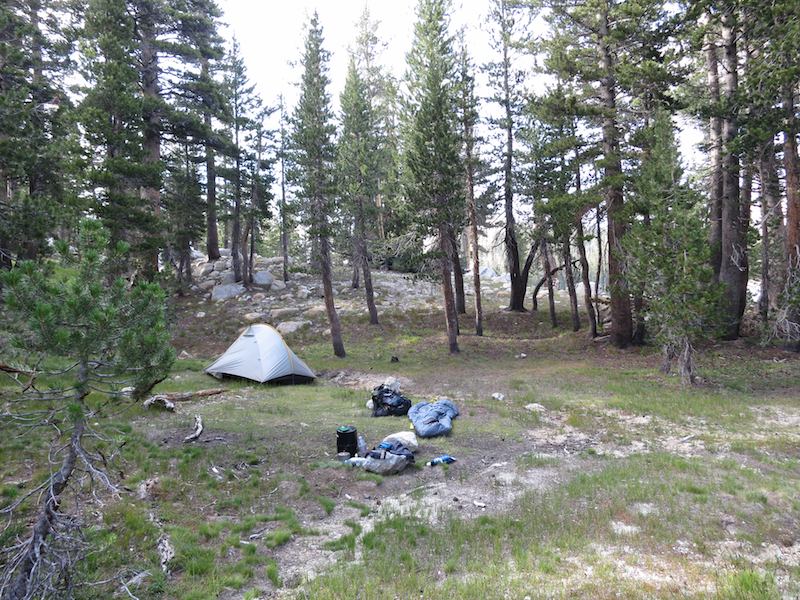 Gear laid out around my campsite at Lower Cathedral Lake.

Getting to and from the hike required some planning. Russell took me to the trailhead the day before I was to start. The JMT permit allowed us one night free camping (no reservation required) at the Backpacker Campground in Yosemite Valley. As we drove up to sites, the ranger told us to be extra careful with our food as a bear had JUST been in the campground 10 minutes earlier. Eesh!

Russell’s brother did us a huge favor by driving him to the west end of Lake Florence so he could meet me half-way through. At the end of the hike, our amazing friend Aiko drove to Lone Pine and took us home. This support made the trip so much easier to plan and execute. Thank you, guys!

There’s much more I could say about the planning, but as much of it overlaps with PCT planning, I’ll go into more detail when I talk about the upcoming hike. Let me know if you have questions about a specific aspect of the planning and I’ll do my best to answer them!