You’ve heard this story before. Friends & family asked about it. Cheryl Strayed told it.

PCT hiker starts with way too much gear, because they didn’t know what they were getting into, then ditches items along the way as they realize they don’t need them. Hiker finishes with a much lighter pack, mirroring their greater understanding of the simplicity of actual human needs, as taught by The Trail. Yada yada.

This was not my story. 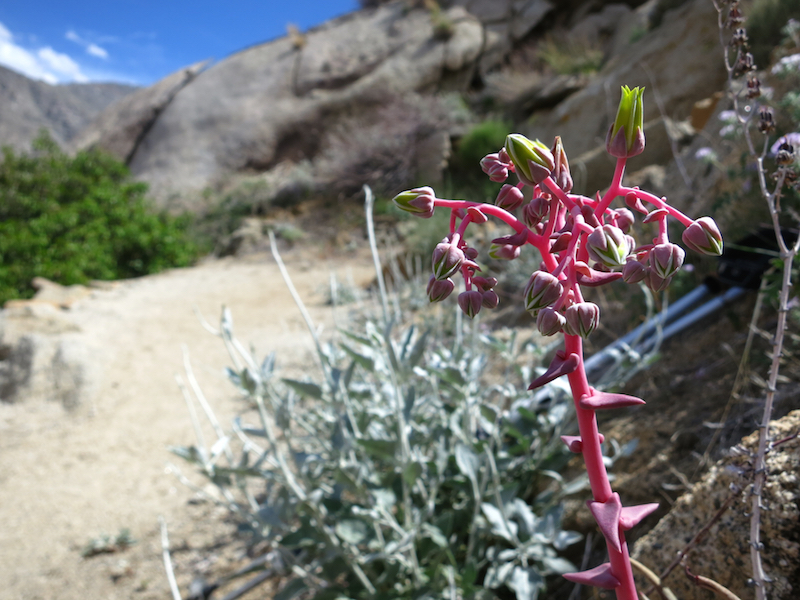 Here’s a totally unrelated picture of the inflorescence of a lanceleaf liveforever plant (Dudleya lanceolata), by the PCT in Southern California. You’re welcome.

If you have been following along with my clothing and gear reviews, you will have noticed that I finished with different gear than I started with. I finished weighing all the gear I bought or borrowed during the hike, and as I suspected, found that I added about 5 lbs to my base weight.

Basically, I started with my minimum requirements, and added what I decided I wanted as I went. Worked for me!

So where exactly did that extra weight come from, and how did I feel about it? Read on to find out.

I’ll let you start by taking a look for yourself at my final gear lists below. I have shamelessly copied the format of Justin “Trauma” Lichter’s Winter PCT gear list, with two lists in one, by means of separate columns for start and finish. If I carried an item at both the start (Campo) and finish of my hike (Manning Park), its weight is listed in both columns. As before, individual weights are shown in ounces, with pound weights shown per category and in the base weight and skin-out weight totals.

After listing all my gear, I list the special categories: Sierra and Desert. Finally, I show an estimated total weight for the start of 4 day section, and for my departure from Kennedy Meadows.

Note: These gears lists are not recommendations, rather records of what I used.

Oof! What a beast.

Let’s talk about it.

I really cared about gear before the trail. I wanted to push my limits, to try the lightweight gear I was curious about, and see just how little I could do with. Far from being unprepared by carrying too much, I swung fa-a-ar the other direction, and was unprepared by not having sufficiently practiced with the little that I brought. And didn’t care! I knew enough to know how to stay safe and found on the trail, if not precisely comfortable, in case of some user error regarding the little-tested gear.

And I’m glad I did push my boundaries like this. I’d do it again.

Even now, after the trail, I still enjoy researching gear and thinking about optimal backpacking & thru-hiking systems.

On the trail, however, I didn’t give a shit.

For real, I just didn’t care. I spent hours and HOURS researching tiny details at home, then on the trail would spend 5 minutes and just be DONE. It was a glorious feeling, not giving a shit. Really, it’s one of my favorite take-aways from the hike: once you’re out there, the most optimal piece of gear in the world is not as useful as the working piece of gear in your hand.

I’m not saying I didn’t care when my pack felt heavy. Trust me, I cared. That 41 lbs carry out of Kennedy Meadows?! That sucked. What I didn’t care about, was whether I was being an Ultralight Hiker. I just wanted to be a PCT hiker, all other adjectives optional.

Though my base weight increased over the course of the hike, I am glad that I started out with it as low as it was. Between getting my feet and legs used to walking 20 miles a day, getting my mind used to being in a constant state of motion, and carrying 4 liters of water at a time, having the start of the hike be at the easiest weight setting I could manage was wonderful.

Different next time? Sure.

Despite being satisfied with the gear I used to finish the hike (after all, I got to Canada with it), I would certainly make some changes from that gear for the next thru-hike, particularly if money weren’t an issue.

My 12 oz Rab down jacket is just too heavy to be optimal for thru-hiking, especially when there’s an ~8 oz Montbell down parka on the market. Same for the 10.5 oz Patagonia raincoat. And I am curious about the ZPacks Arc Blast pack, and the Gossamer Gear Mariposa, and lots of other lighter pieces of gear.

Alcohol stoves! Flat tarps! Cuben fiber! So much to research, so much to try.

While I enjoyed researching lightweight gear options prior to the trail, and look forward to continuing to explore my limits on the trail, my only goal once I was out on the PCT was to finish the hike alive and with all my limbs intact. I found that I didn’t care if I finished fast, or with UL cred, just that I finished (and enjoyed my time).

I was a bit surprised that I felt this way. I thought I would care more that I didn’t use all my boundary-pushing-for-me gear (frameless pack, quilt, poncho-tarp, no-cook system) the whole way, or even half of the way.

I think what happened was that my mind figured out that it only had so much bandwidth while undergoing the tremendous stress of thru-hiking. To accomplish my aim, I set aside all other goals and focused on just walking. Testing certain hiking methodologies, or more precisely, my comfort or interest in such methodologies, turned out to use up too much bandwidth, and I chose to throttle back to the basics of just walking to Canada, with whatever gear would get me there.

On the days when getting myself to keep going was a struggle, not having to tough it out with cold food or a non-private shelter really REALLY helped.

Perhaps now that I have one successful thru-hike under my belt, I’ll have more bandwidth for using more minimal or ultralight gear on the trail. Or even better, I could get out there on more shorter backpacking trips and actually practice with gear in lower stakes situations.

Or, maybe I just like my comforts and only like the idea of ultralight hiking. That would be fine too. Everything is fine.

(See, I didn’t miss all the deep lessons of The Trail.)

For now, I’ll keep researching and planning until the day I leave, then leave it all at the trailhead.