The bench & tarn below Donahue.

The sleeping-out was nice last night. I thought I saw a few meteors from the Pleides shower. I had strange dreams, about seeing a bear, and seeing a herd of bison that turned into people in costumes. I got up around 6:15 am and was out of camp at 6:50 am (courtesy of Ben’s watch). I hiked up to the little lake below Donahue Pass and had breakfast there. Ben caught up with me going up the climb to the pass. 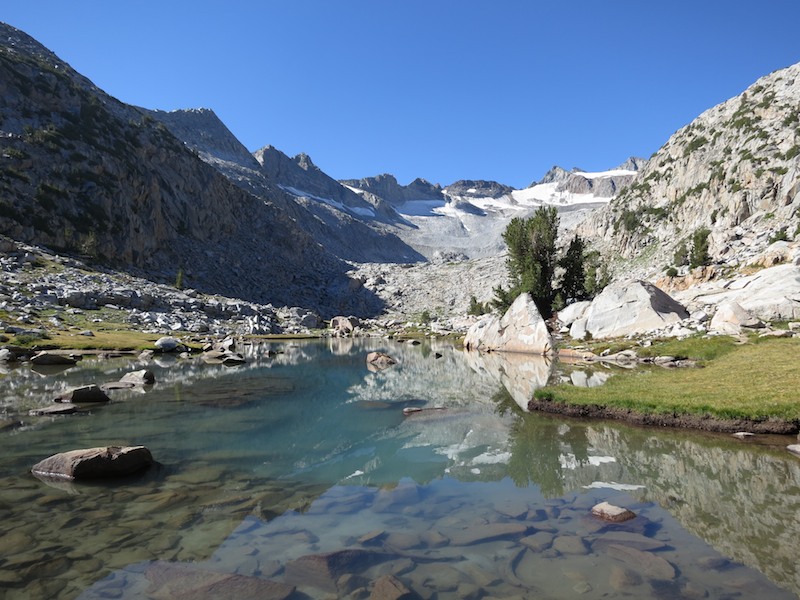 This lovely snow-fed tarn sits on a bench below Donahue Pass.

I feel like I’ve seen many more people today. Perhaps Day 2’s scarcity of people was an anomaly. Anyway, the views climbing out of the Lyell Canyon were gorgeous, and the tumbling meadow on the East side of the pass was just as lovely as I remembered. The climb up to Island Pass felt like a real slog — long, hard, unending. Hiking right after lunch always does me in. 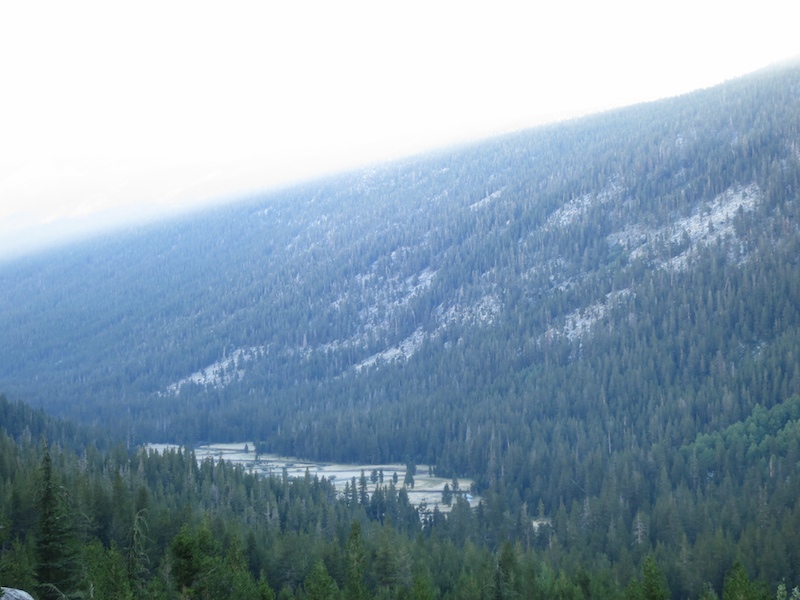 Looking down on the oxbow bends in the Lyell Fork.

Ben & I hiked together most of the day after he caught up with me; I suggested we go solo again tomorrow and he agreed. He was nice to hike with, but I enjoy solitude as well. 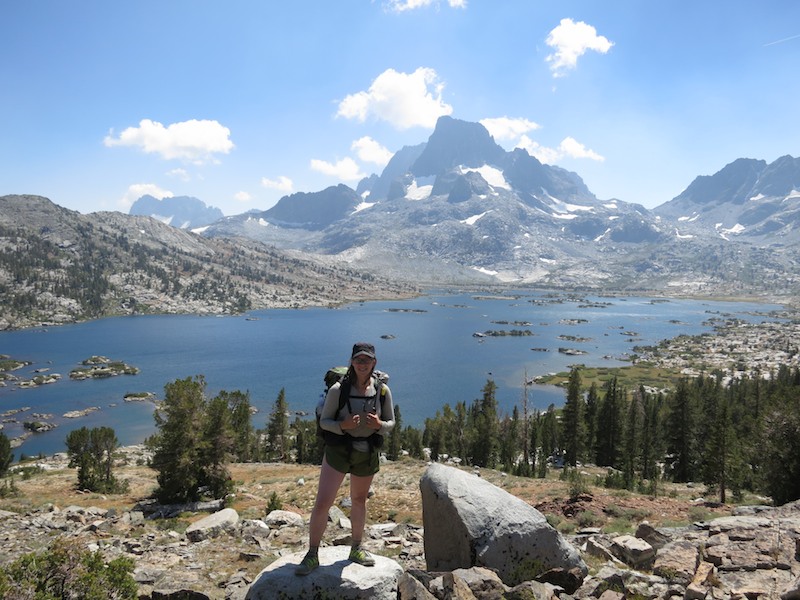 We got to a nice viewpoint above Thousand Island Lake around 3:15 pm, and I was able to call Russell! It was good to hear his voice, and also odd to hear about life off the trail. I am now camped by the lake, in a rather windy spot. I’ve pretty much crashed. I managed to haul myself down to the lake to wash my feet & socks, but that’s it. I’ve crawled into my tent and have been napping. 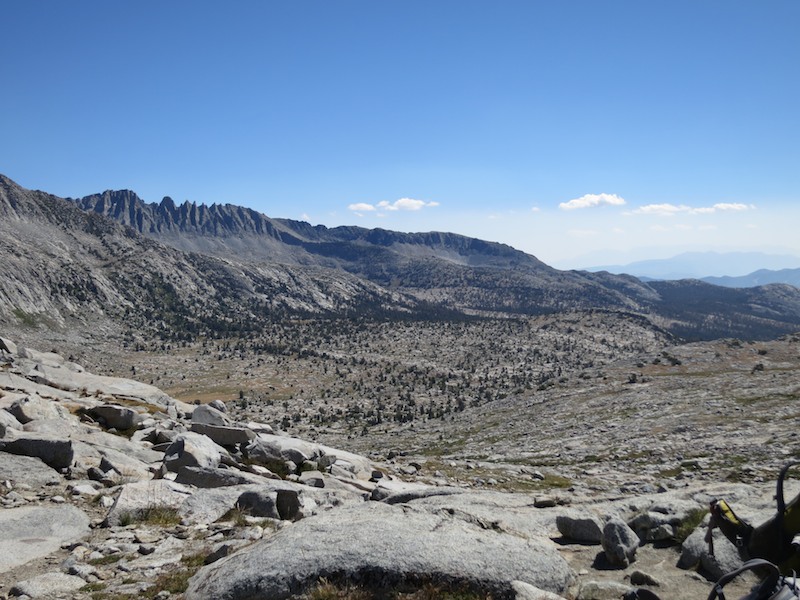 The southbound view from Donahue Pass.

—— I made myself get up, and make the rice & beans dinner. It took a long time to eat, but I felt way more alive at the end of the meal. I ate a small piece of chocolate while I was waiting for it to cook. Chocolate is amazing out here — I’m not craving it the way I expected, but a few times now I’ve eaten a piece when I felt brain dead, and instantly was revived.

I wore the running shorts for most of the day. It was less of a pain than I expected to put sunscreen on my legs. I didn’t do any other body parts though, and I think I have a mild burn on the right side of my neck. I’ll put sunscreen on before dressing in the morning tomorrow. 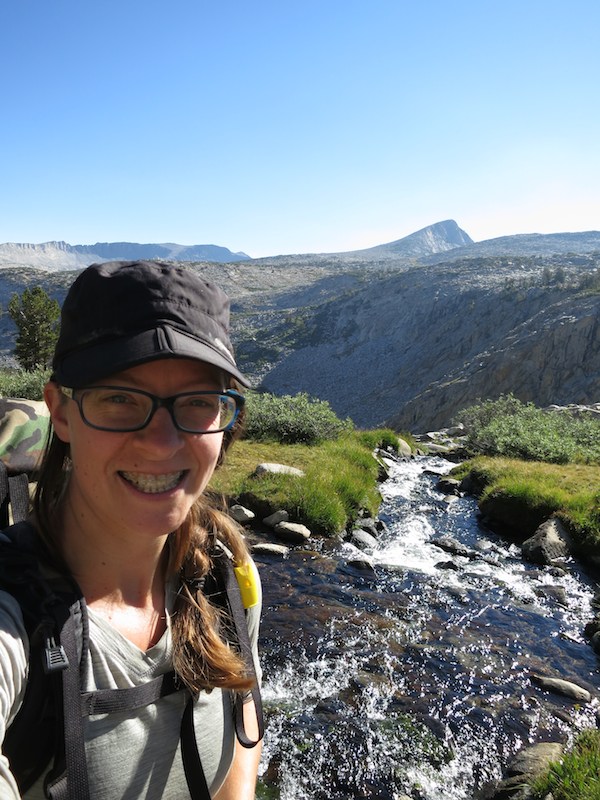 At a creek on the way up to the tarn below Donahue pass.

The nights are the hardest time on this hike for me. I get tired as soon as I stop walking, and have little interest in camp chores. I’ve been making myself do them to get into a good habit, but it’s only grudgingly. I have little interest in a hot meal — cooking feels like a chore. I get bored as well. I want to retreat into the tent, but have trouble sleeping while it’s light, so end up lying abed. The poems [Edna St. Vincent Millay] are good, but not gripping like a novel. I think the boredom will be different with Russell to talk to.

On the trail past Donahue, we met a young man working for the National Park Service. He had a large shovel and hiked quickly, passing me three times. He was maintaining the trail in Inyo National Forest. Which reminds me, I’ve passed out of Yosemite into Inyo. We also met a pair of women with huge packs hiking with their dog Daisy, who had doggie saddlebags. I petted her — very sweet. 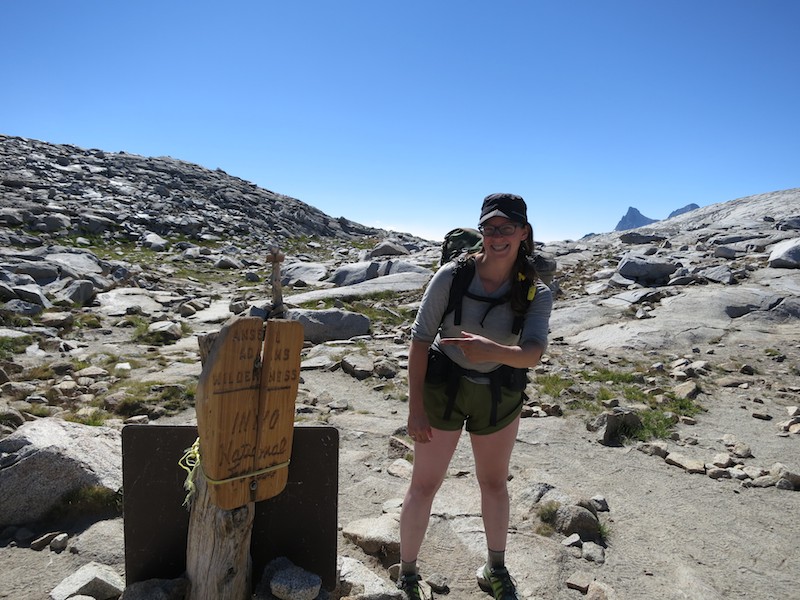 I think I smell bad. I may be able to take a shower at Red’s Meadow, or at Muir Trail Ranch, but maybe not. I don’t mind so much. Ben carries his clothes in a “peak bagger” — a 2 oz bag he can use as a day trip backpack. I love that idea and will look into adopting it for future trips.

Feet: pinkie blisters still there, and getting annoying. not sure what to do about them. irritation on back of right heel is holding steady. small tear in fabric on back top of heel on right shoe.

Body: feeling good. fairly regular poops (once a day). been wearing glasses since Day 2. My lips are getting chapped. I’ve been applying chapstick but they did bleed some. I have irritation where my thighs rub together in the shorts. Tried putting chapstick on it, only made it worse. Oh well!

“The sleeping out was nice last night” — hahahaha. Wow, I would say I sanitized these entries as I wrote them, but given the number of times I talked about crapping, that can’t be true. I enjoyed the sleeping-out in many ways — feeling the air on my face, not feeling trapped in a tent pretending it would save me from any determined attacker, hearing the sounds of the forest as the night progressed, how easy it was to pack up the next morning — but I was also scared witless. Those dreams were semi-lucid: I definitely actually thought there was a bear and that I would probably die. 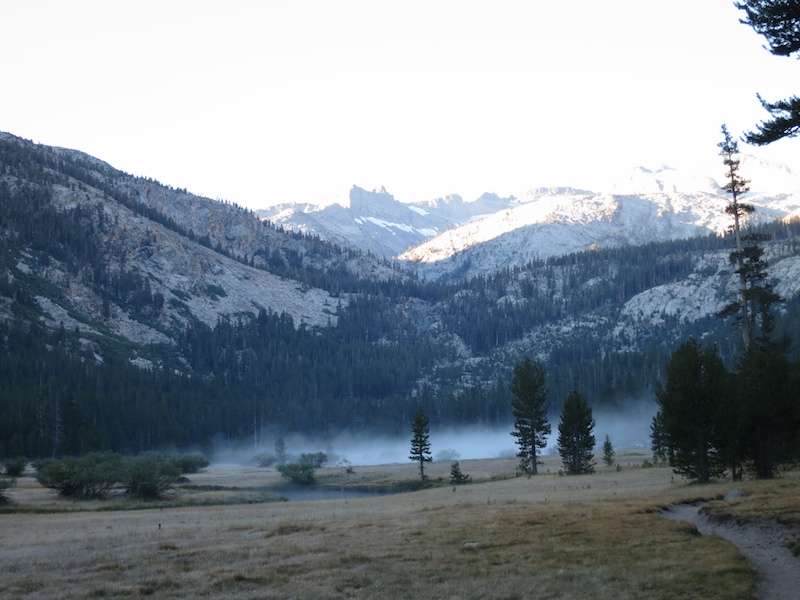 Early morning mist rising off the river in Lyell Canyon.

I liked the cowboy camping well enough to try again later down the trail though, and I will keep doing it as long as I keep wanting to, for as long as it takes to get over the fear.

As I’m typing up this journal, I’m remembering how tired I was during those first few days. I hadn’t figured out how to eat enough, even when I didn’t feel like it, and that really impacted my energy levels. Even though I had spent the three months prior working 5-10 hours a day on a farm, my body wasn’t used to the repetitive work of walking. It’s also interesting to notice how early those blisters developed… those got worse before they got better. 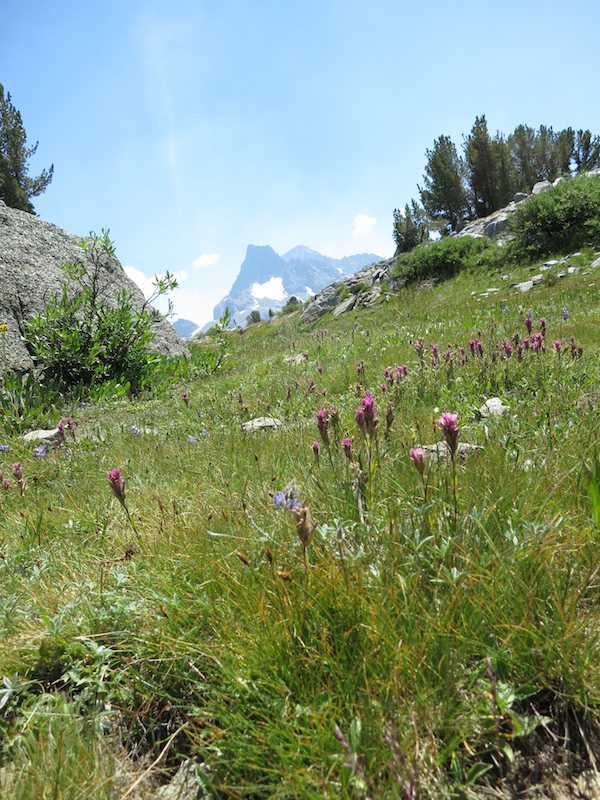 Oh god, the chapstick on the chafed thighs. Terrible idea. DON’T DO IT unless you’re into burning sensations.

I have had issues with “chub rub” in the past; when training for a half-marathon in 2011, I got it so bad I eventually switched from shorts to half-length spandex running tights, which solved the issue nicely. My thighs did toughen up over time on the trail, leaving lovely purple calloused patches. Classy. I may bring Body Glide on the PCT, but I may also just let them toughen up (like they eventually did on the JMT). 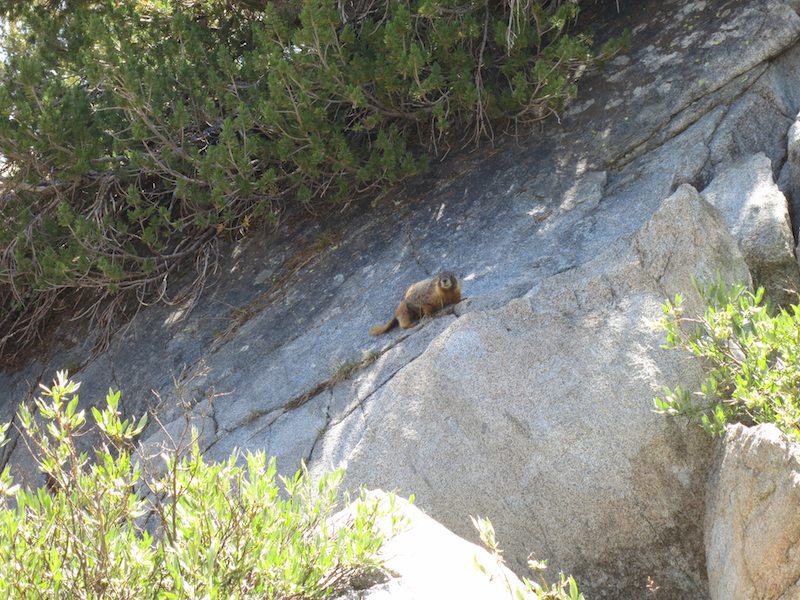 My complete lack of desire to do any work around food on the trail is a source of amusement to me. At home, I love to cook. I bake, preserve, cook things from scratch — it’s a major hobby of mine. On the trail, I want to add water and be done. I hadn’t remembered that my disinterest in trail cooking showed itself as early as Day 4. Good to keep in mind for this year’s planning.