I never get tired of the "bear with shopping cart" graffiti on this sign.

Today was my longest hiking day yet. I started out from Thousand Island Lake around 6:30 or 7. Before leaving, I had a rather urgent, rather loose shit. As I was digging the cathole, I realized it was possibly in a dry stream bed. I shat in it anyway. 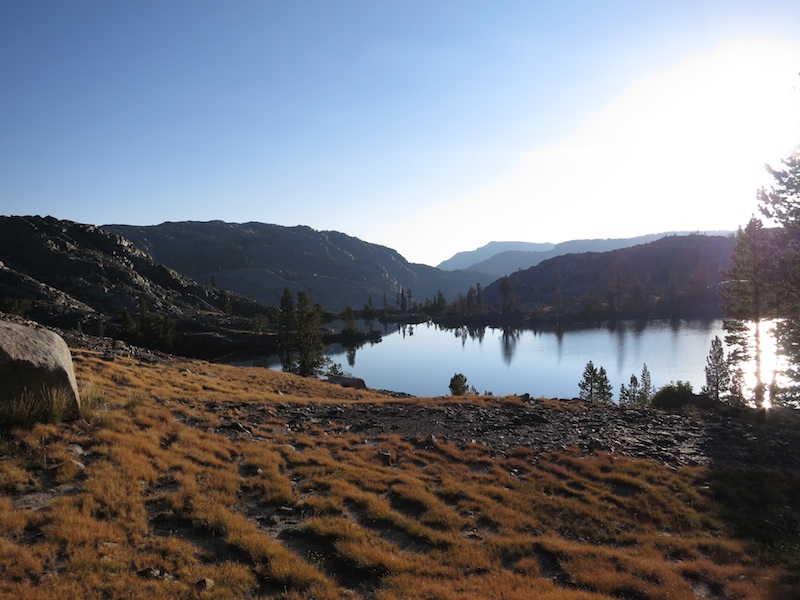 I made great time to Garnet Lake, passing campers at Emerald and Ruby Lakes. I ate breakfast overlooking Garnet, and moved on. Shadow Lake was gorgeous, and I managed all the switchbacks out of the lake without taking a break. I feel v. proud of that. Rosalie & Gladys were lovely too. I paused for a snack by a stream on the way to Shadow, and met a young couple hiking. The woman went to Cal, and had lived in Portland OR. I ate lunch near Trinity Lakes with some folks I’d passed earlier: Andrew, Nell, & Sasha from Maine. 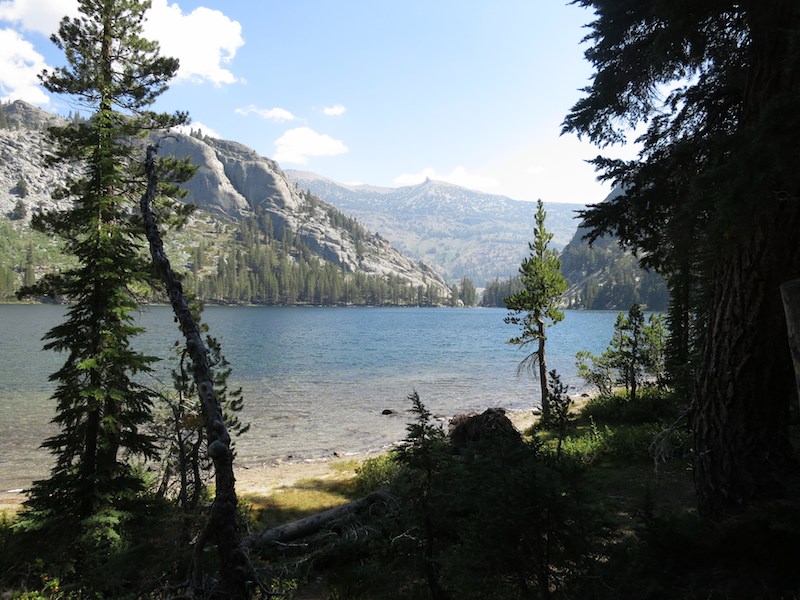 I ended up crossing paths with those three several more times, and ran into them as I got to the Red’s Meadow Cafe & General Store. I decided not to stop at Johnston Lake as I’d initially planned; the lure of a meal that someone else cooked was strong. I am now camped in a site ($20 for all of us) shared with the Mainers. We ate dinner together at the cafe (cheeseburger, beer, pie à la mode), and I gave them my excess food from my pickup. They were pretty excited about the extra Snickers. 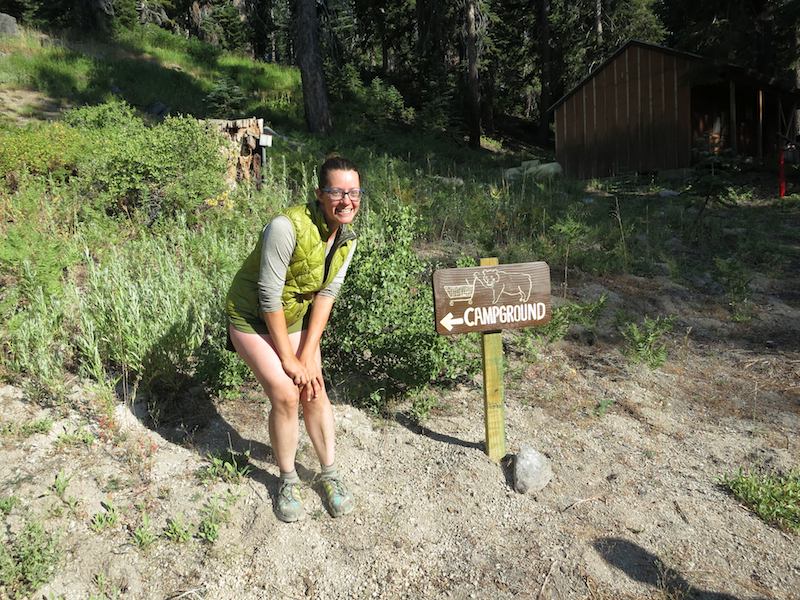 I never get tired of the “bear with shopping cart” graffiti on this sign.

I took a shower! $7 for the shower, $2 for the towel — worth it. The Devil’s Postpile area is so so dusty; there was dirt all the way up to my thighs. I think I’m going to head out after breakfast at the cafe in the morning, and head for Purple Lake.

Feet: The blister on the left pinkie burst, hurts less now. Had some midfoot twinges on my right foot around mile 16. Shoes holding up.

Body: Tired. Felt amazing after the long switchbacks. Had some hip twinges later in the day (mile 15? 16?). no kidney/side issues. Didn’t drink enough water, urine was yellow in evening. Will look for body glide at the store in the morning. 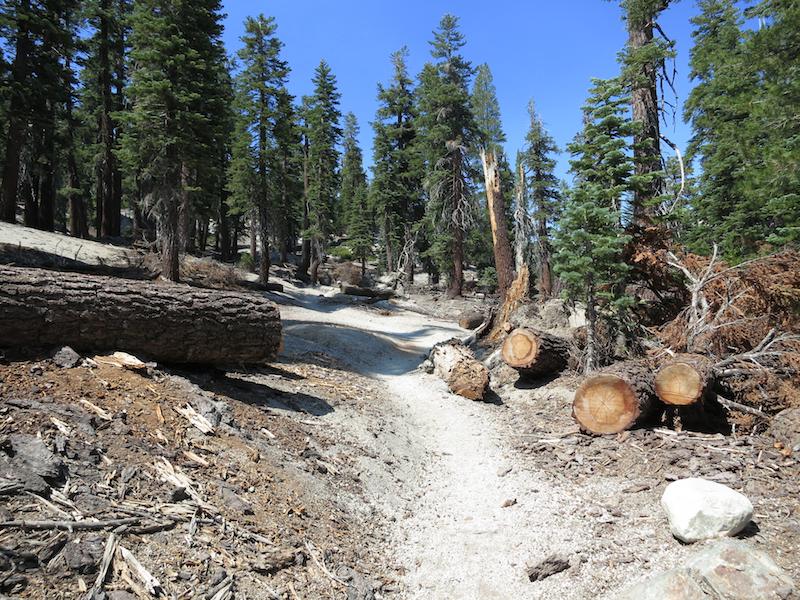 Blowdowns cleared off the trail near Reds Meadow.

I included that first paragraph of my journal entry today, because sometimes shit happens. Urgently. In a place it shouldn’t.

I am not proud of the cathole placement I made that morning. If that pattern of rocks did indicate a tiny (2-3″) stream bed or water path in rainy seasons, than my waste could get washed down to the lake instead of breaking down underground. Hikers try to follow the principle of “Leave No Trace” (LNT), and this was absolutely not best practice.

Then again, given the urgency of my innards, the alternative, once I realized where I had dug, was to crap my pants. This would have resulted in immediately washing out the soiled shorts, which would not have been LNT either. The better thing would have been to pick a good spot to dig in the first place. Sometimes you get sick though, and there’s not much you can do. Mitigate the harm, figure out what to do better next time, and move on. 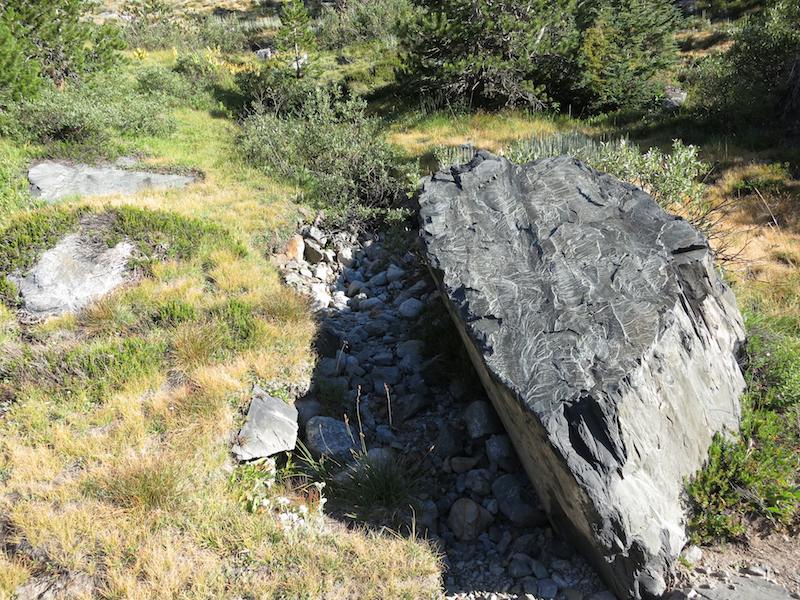 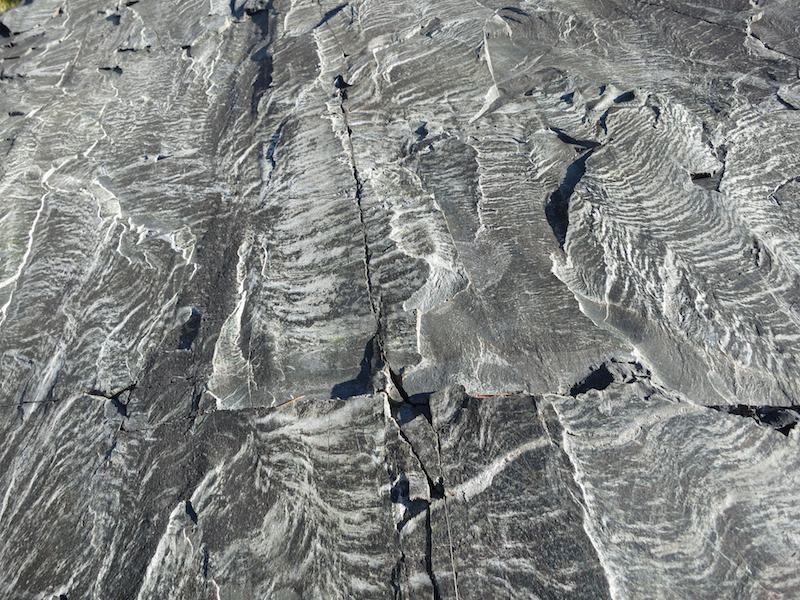 Close up of the interesting rock.

Moving along, this was the day I started to get my trail legs under me. I powered up those switchbacks, feeling the burn and satisfaction each time. I ended the day tired, but not destroyed. That stretch of the trail is gorgeous, if a bit repetitive: hike down to a hike, walk next to the lake, climb up over the next ridge, repeat. Shadow Lake is the most beautiful to me, though so many others agree that the available camping sites have been overused and the lake was off-limits to all camping that year. I heard of some people camping there anyway, and getting woken up in the middle of the night by a bear cub and its mother. 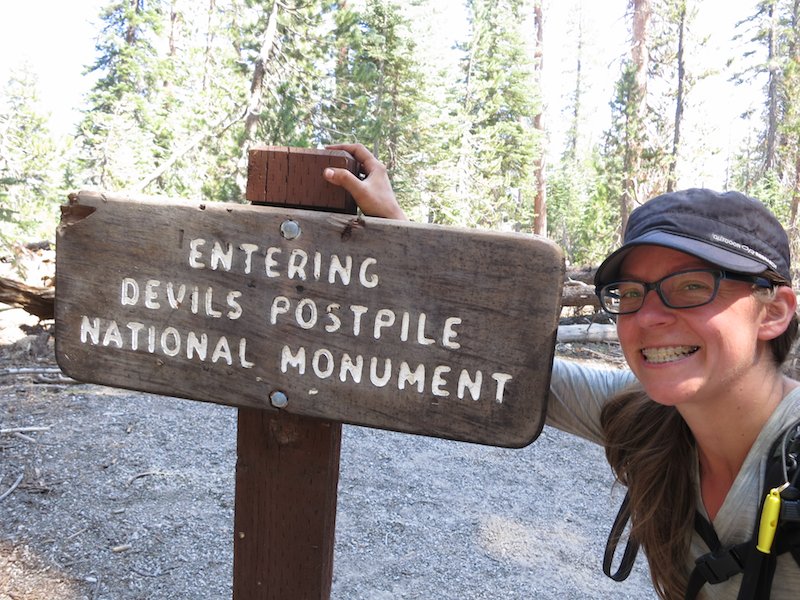 Showing my tired as I enter the Devil’s Postpile National Monument.

When I got close to the Devil’s Postpile area, I chose to take the “official” JMT route along a dusty slope, rather than walking down through the park area, and I am glad I did. We ended our 2012 hike at the monument, so I had already seen the basalt formation up close. The JMT route gave me a view from higher up, and it was worth it. 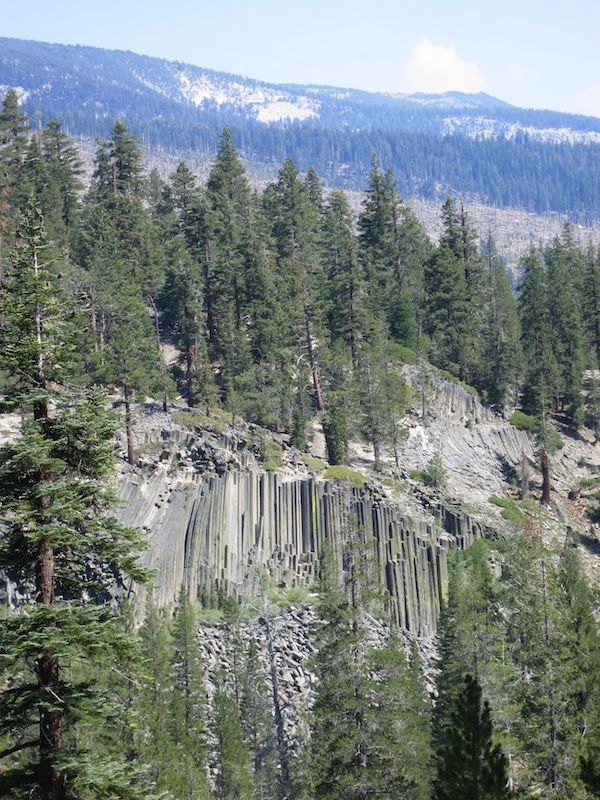 The Devil’s Postpile, a basalt formation near Mammoth Lakes.

I hadn’t decided to go all the way to Red’s Meadow when I started that day, but at some point I got in my head that I wanted a burger, and that thought took over. Soon all I could think was “BURGER. BURGER. Maybe even CHEESEBURGER. BEER. ICE-CREAM.” I powered through my longest day yet on that mantra. On Day 3 I was not happy to enter civilization in Tuolumne; on Day 5, I was so willing to go there at Reds. Getting to hang out other hikers while drinking beers and eating food other people made really hit the spot. 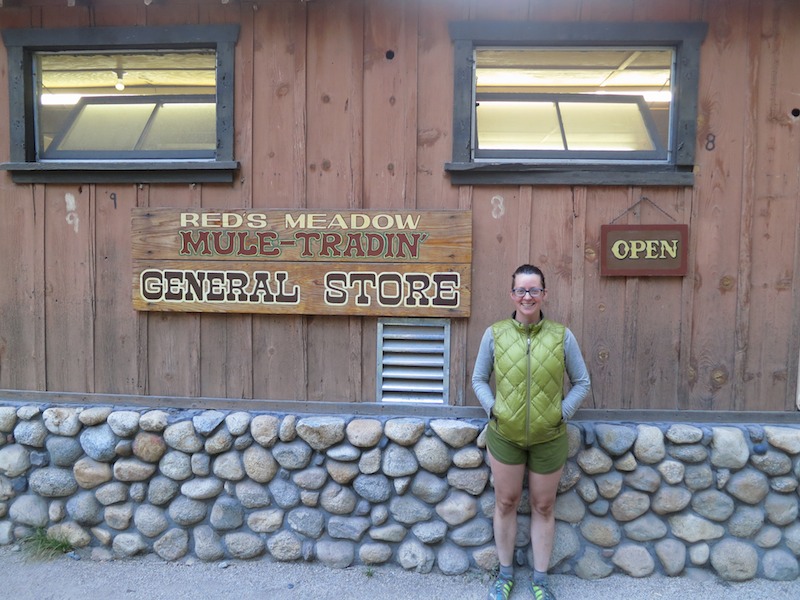 I picked up my resupply box at the General Store, and sorted it at the campground. I was sick of the peanut butter in a tube that I’d carried from Yosemite, and was thrilled to give it to Andrew. He then put nutella in it. NUTELLA, guys. Genius.

A note on the feet/body updates: I had sprained my right midfoot (between toes and heel, not ankle) in a bike crash in September 2012. In a weeklong hike in November 2012, I was downing 3 Ibuprofen a day to deal with the pain, so I monitored how it felt closely on the JMT. The kidney/side pain refers to a fall I took in June 2013, in which I bruised my right kidney and had some internal bleeding. By the time I started the hike I was back to full strength, but I was within the window when it would have been dangerous to re-injure that kidney, so I paid attention to that too.