Through Glacier Peak Wilderness to Stehekin

Between Highway 2 and the western tip of Lake Chelan, the scenery blew my mind, and the temperatures dropped. Here were the starvation, freezing nights, and bitter wind, the soaring hawks, endless vistas, and sketchy log crossings. This section kicked my ass, and I’d do it all over again. 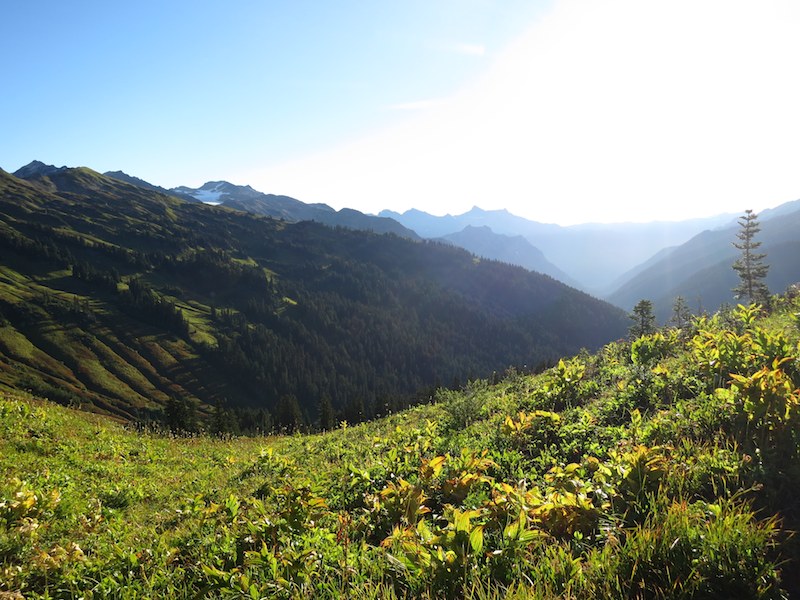 Why did I hike the PCT? Because views like this. Mountains and valleys north of Stevens Pass in the morning light.

After the drama of the missing box, and the hustle & bustle of the Dinsmores’ Hiker Heaven, I was happy to be back out in the woods. After a leisurely lunch in Skykomish and easy ride back to the trail (thanks, Beer’s cousin), I made it 10 miles out of town to camp at the crowded Janus Lake. Port and Starboard showed up that night, as did Emu and Mozzie.

The next day I hiked with those 4 hikers on and off, ending the day at the breathtaking Reflection Pond, which turned out to be the coldest campsite of the night. Over the course of the day I could see Mt. Rainier far behind, Glacier Peak nearby, and a hint of Mt. Baker to the northwest. 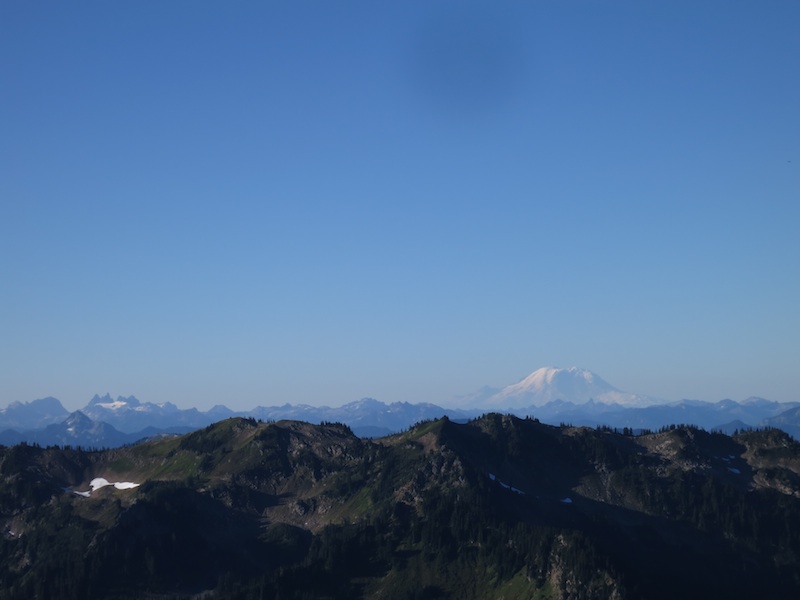 Still boggles my mind — I walked from past that mountain. Mt. Rainier in the distance.

I finagled my tent into a stealth spot on a slope above the pond, under some trees, attempting to get out of the biting wind. That night, I made some excellent decisions to avoid getting out of the tent when nature called. I wrote in my journal:

Just tried to pee into a bottle. Missed. Wet wiped my sleeping mat. Peed into a ziploc. Got pee on a lot of things. Didn’t really care. Felt like I should care.

Aaand, that’s the PCT, ladies and gentlemen. Strips the civilization right out of you, until you no longer care that everything you own is covered, or at least flecked, with urine. And trust me, that’s a good thing. Not only “don’t sweat the small stuff”, but redefine the shit out of “small stuff”.

(Spoiler alert: the only remaining contenders for ‘big stuff” are death, broken legs, and running out of Snickers.) 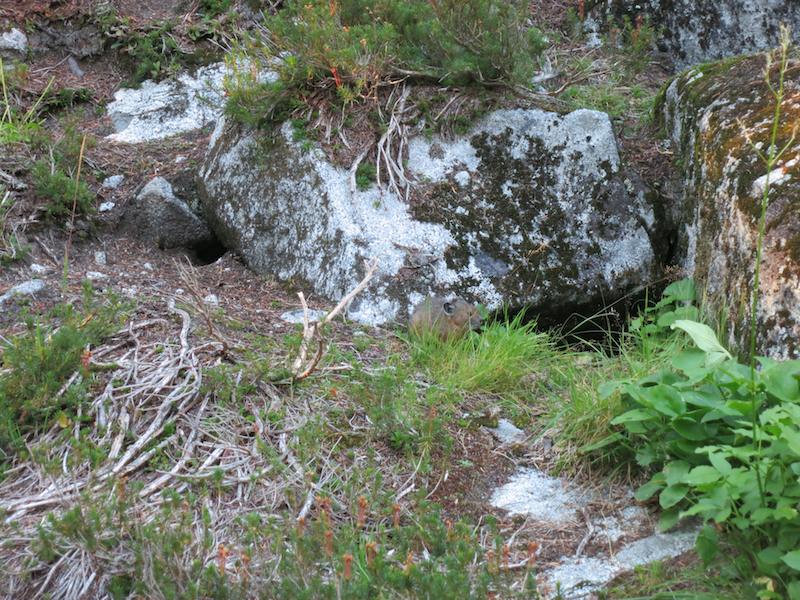 Need a break from pee stories? Have a pika! It was super cute and squeaked a lot.

The next morning I got up early (for me — it was probably 6:15 or so) and hiked out along the ridgelines between Red and White Pass. As I was tootling along on my own, I saw two raptors circling overhead, one large, one smaller. I stopped, watched them soar and hang still in the air above me for several long minutes. 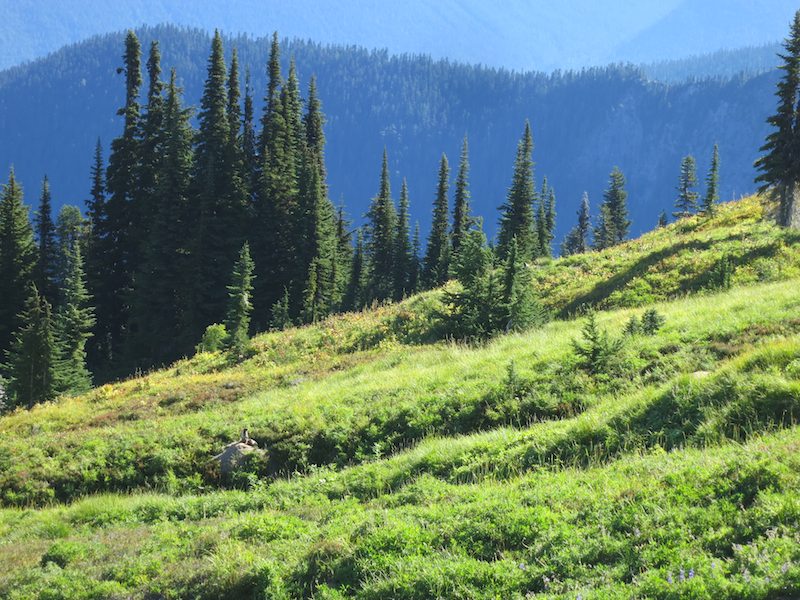 A hoary marmot in Glacier Peak Wilderness doing its best meerkat impression. Not pictured: the hawk circling overhead, and the (field?) mice whose squeaks touched the upper limit of my hearing.

I watched the smaller raptor flying low near me, and turned back toward the trail, dumb grin on my face, only to see the larger one swooping directly toward me, not 20 feet away. He pulled up shortly, but not until after I felt thoroughly inspected. Gave me shivers and an even larger grin.

Basically, Glacier Peak Wilderness is the most beautiful part of the trail, nay, the world. Go there and weep tears of joy that this landscape exists and you get to be in it. 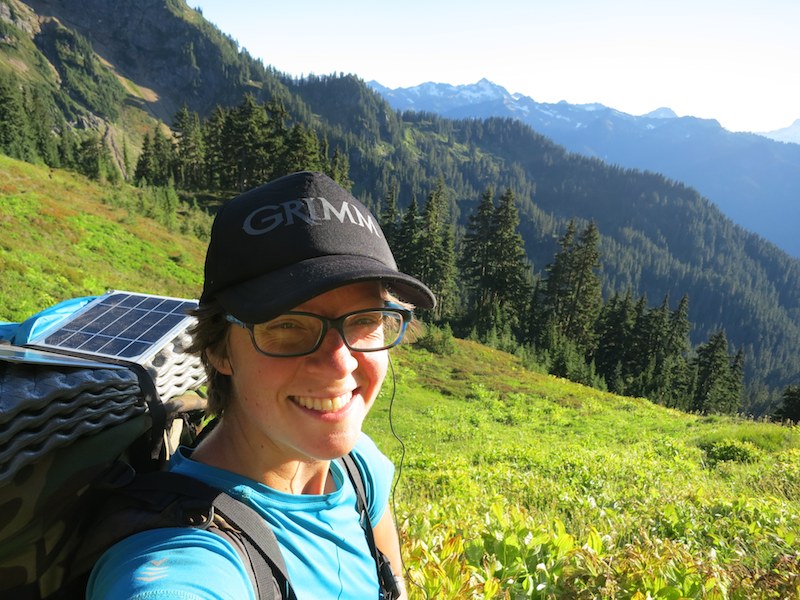 I pulled ahead of Port and Starboard somewhere that day, and pushed on til dark, making camp at a stealth site above a creek. I was nervous camping alone again, but this time forced myself to cook dinner, albeit right outside my tent while I sat inside. Progress, bitches.

The next day was not the longest in terms of miles, but may have been my hardest of the trail — 25 miles with about 9000 feet of elevation gain. I pushed from 7:45 am to 7:45 pm with only one half-hour break, up two huge climbs, down two slogging descents, and some wandering aimlessly through the rocky Suiattle river bottom on the Old PCT alternate, looking for cairns marking the way to the log “bridge” over the rushing river. 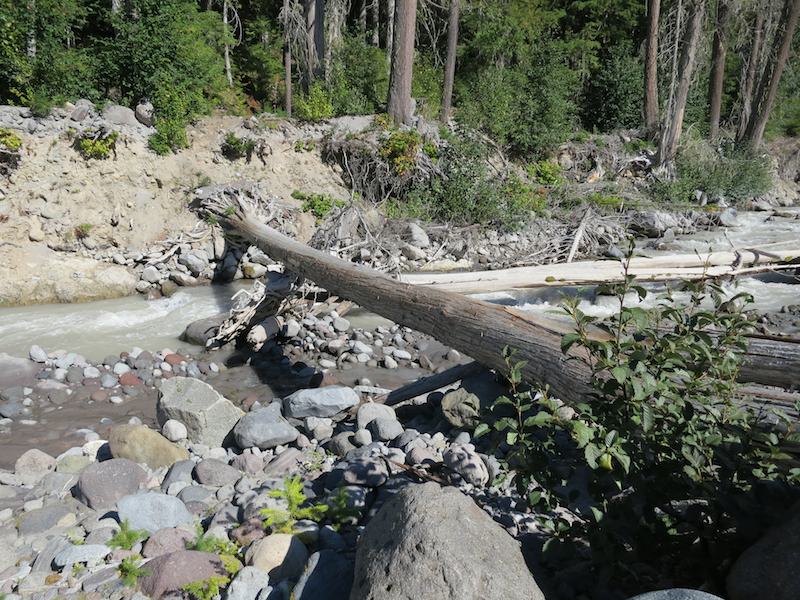 The days were getting harder, more up and down, and the nights were staying cold. My left hip had started hurting after leaving Bend OR, and flared up on the long ascents and descents throughout Washington. At times it was bad enough to make me stop, bend over to take weight off it, and rub the joint until I felt like I could keep going. Oh, and pop 600 mg of Vitamin I, which I generally avoided since the NP in Big Bear warned about possible ulcers from overuse. A few times it felt like cold water splashing on the outside of my hip, and that freaked me out a bit. 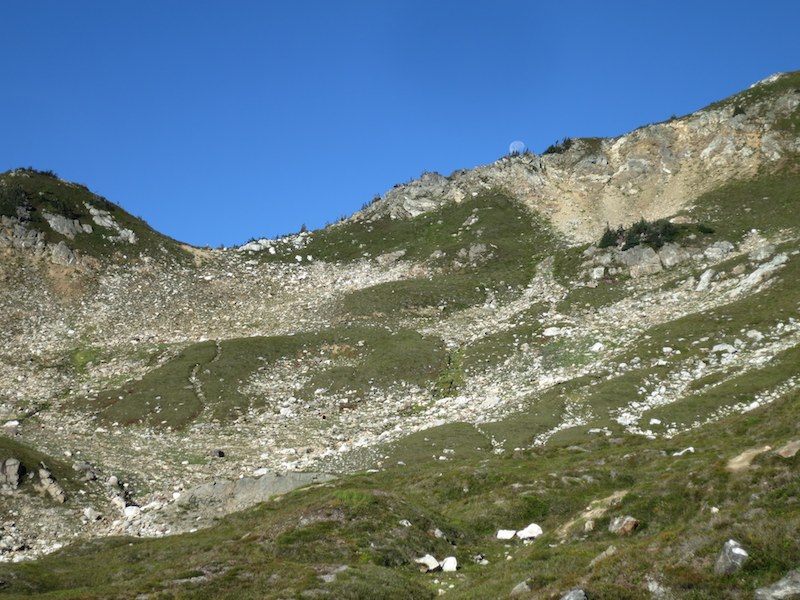 The trail was an icy slip-and-slide down the face of this bowl. Can you find Port and Starboard at the saddle.

At the beginning of the trail, sporadic biting pain and paresthesia would have frightened me badly. I might have called Russell crying, wondering if I could finish the hike. Midway through Washington, there was still a part of me that worried about it, but mostly I knew it wouldn’t stop me unless my legs stopped obeying my brain entirely.

I wondered if I was making a choice to put finishing the hike over my long-term health, but I knew I wouldn’t stop even if that were the case. I was too close to the end. 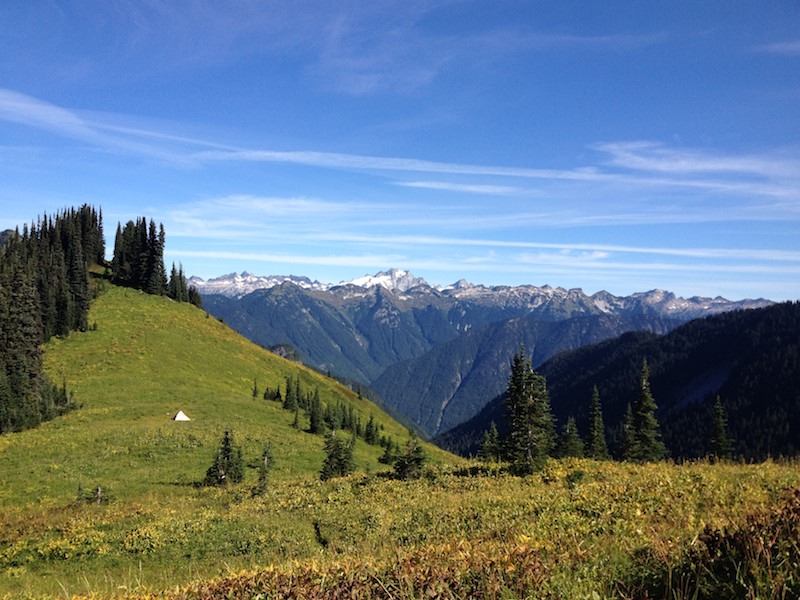 A hunter’s tent on the ridge before the Suiattle River. On my descent, I met the hunter taking a break on his way up.

Nevertheless, between hip aches, knee twinges on downhills, decreased sensation in the tips of my toes, and general feeling of malaise for the entire segment from Skykomish to Stehekin, it felt like my body was starting to give out on me. As Emu put it, “The wheels are coming off the wagon”. 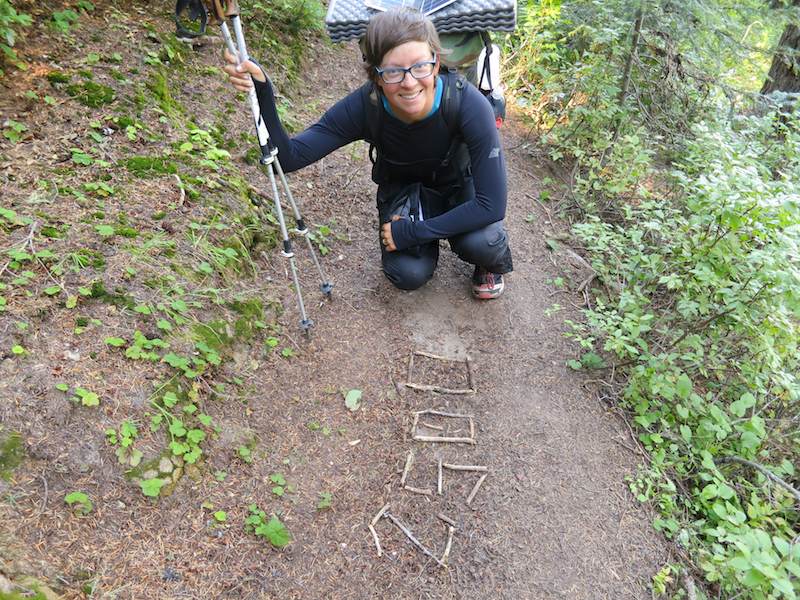 Feeling bone tired at the 2500 mile marker. Squatting is hard when you have been destroying your joints for 5 months.

It didn’t help that my hunger had ramped up again. No amount of food ever felt like enough. The last night of the section, I journaled that I “spilled pasta dinner on my hat, buff, & sleeping bag. Licked it off everything.” That sleeping bag was not clean, AT ALL, and I just didn’t care. The thought of losing those calories was too much to bear.

I walked into Stehekin with nothing but my emergency dinner and two chocolate bars that my body was completely uninterested in up til that point. Thigh Gap and a flip-flopper helped me kill the bars as we waited for the bus to town. 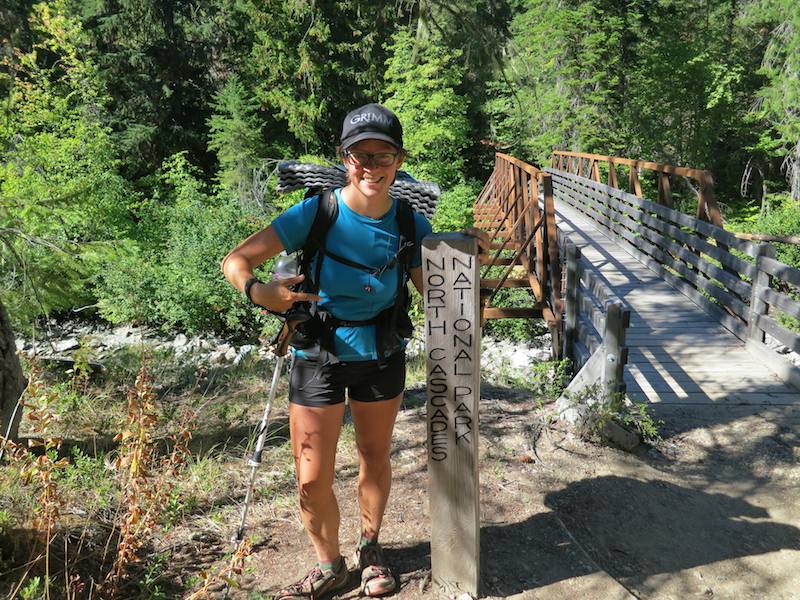 Reaching the last national park of the hike.

Stehekin truly was the incredible haven of pastries and rest that I’d heard about. I managed to go to the fabled bakery no fewer than 4 times, because when I heard that the other women were considering a zero day, I rapidly decided to join them. I hadn’t zeroed since Bend, and it was taking a toll mentally. 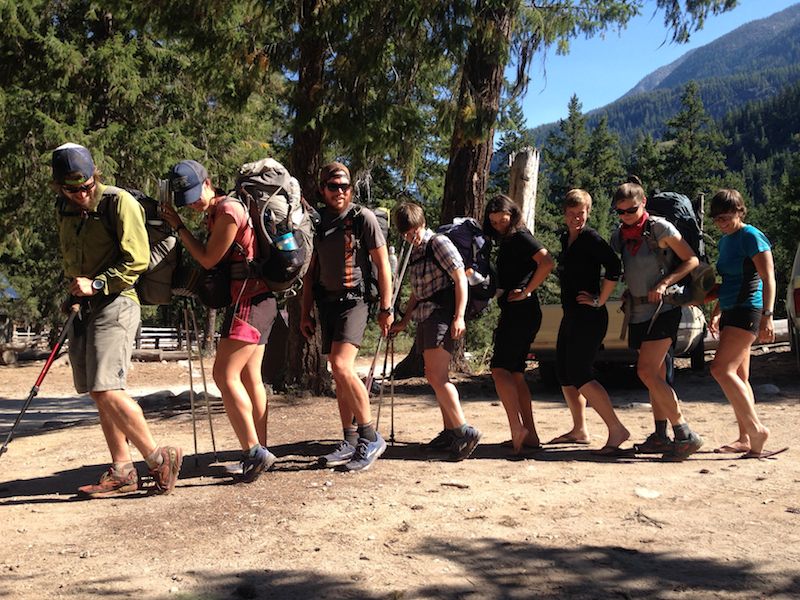 No chicken legs here. The amazing hikers who taught me how to hike a 30, and gave me the motivation to keep going when I wanted to quit in Oregon: Sparkle Motion, Beacon, Thigh Gap, Hot Tang, Emu, Mozzie, Wild Card, and yours truly.

Instead of blitzing through the resupply-eat-shower-laundry-eat-sleep-eat haze of recent town stops, I splurged for a hotel room, a nice dinner at the ranch on the zero, and drank lots of beer catching up with Boomerang and other hiker friends while watching seaplanes land and take off on Lake Chelan. Sheer bliss.

Dusk over the Stehekin dock on Lake Chelan. The resort is accessible only by ferry, sea plane, and foot.