Past the Pasayten Wilderness to Monument 78

For five months, my job had been to hike toward Canada. I climbed up and over every ridge, crossed each river and stream, and marched under or over all the highways and roads, going ever northward. I had been living the outdoor hiking life for almost half a year, and the reality of my impending completion of this challenge finally started to dawn on me.

After a summer of trying to wrap my brain around the enormity of my walk (MEXICO TO CANADA), I was almost there. 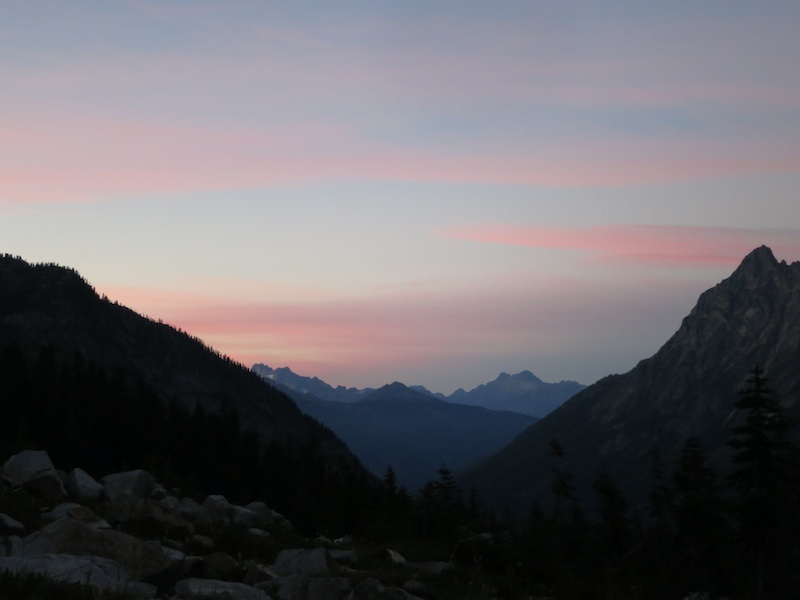 Sunset over the Washington Cascades, foreboding the sunset of my hike. Such drama. Wow.

I hiked out from Stehekin with Port, Starboard, Emu, and Mozzie, packing out a small box of wine to celebrate Port’s birthday. We enjoyed fresh fruit trail magic at Rainy Pass, as well as the remarkably clean campsite bathroom — you start to notice things like that after 5 months on the trail.

The weather was socked in frequently during that last section, which felt fitting. Making it through Washington with only one major patch of rain and largely clear skies had been damn good luck. I’d already seen all the major peaks, so a little fog just added character and solemnity to the final stretch. 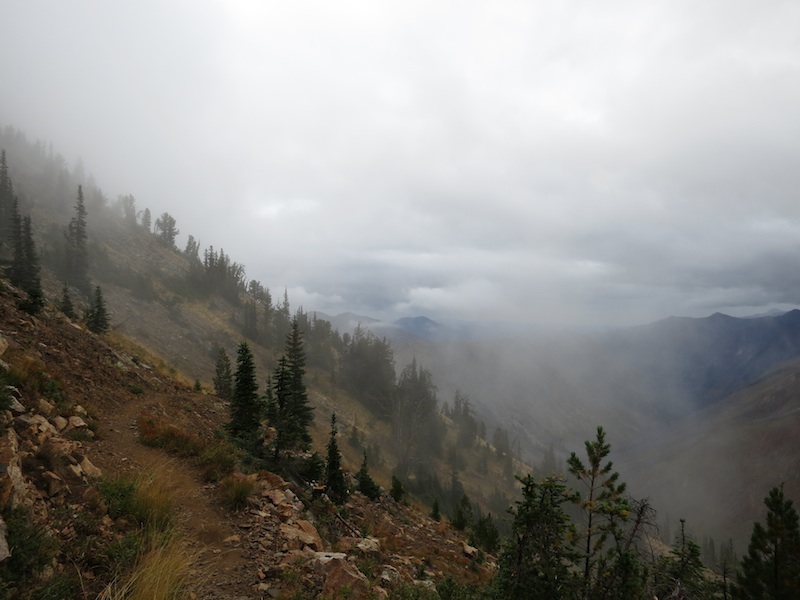 The second night out of Stehekin, the five of us set up camp in a nice large clearing above a spring. Port & Starboard had gone down to get water earlier, and Emu and I went to get some a bit after dark so we wouldn’t have to go in the morning. We had gotten partway down to the spring when Emu stopped and said “Ooh, I see eyes”.

Her headlamp was more powerful than mine, and for a while I couldn’t find them. She thought it might be a deer, and we crept a bit closer, toward the spring. It moved then, quickly to our left, up towards the camp. At that point she saw a leg and said firmly “that is not a deer”, and I was finally able to see the eyes. Definitely cat. 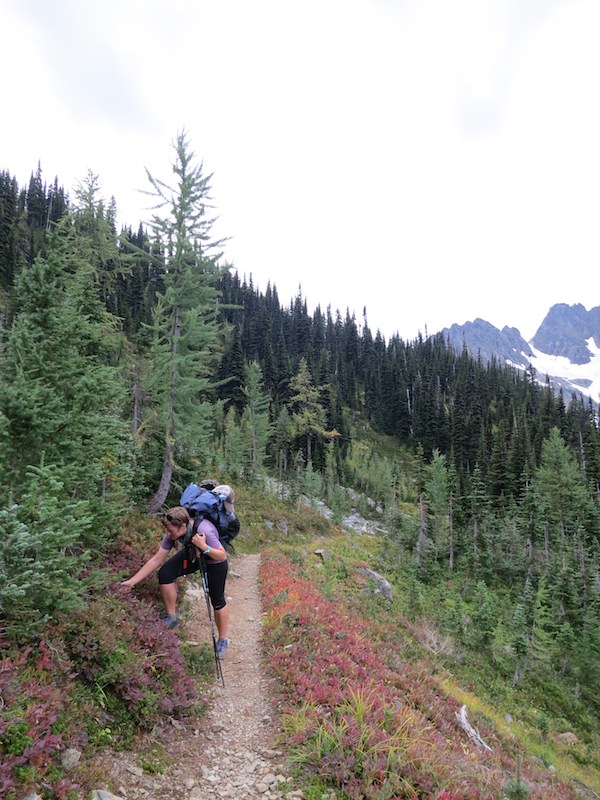 Mozzie browsing on huckleberries. Another hiker, McButters, saw a bear in this stretch, probably eating the berries too.

Knowing we didn’t want the lion to cut us off from camp, we moved back-to-back and quickly walked back up the rocky path to the tents, talking loudly as we watched for Puss above or below. I won’t lie, it felt a bit hardcore. I may or may not have felt like I was in some cool adventure movie. The heroes don’t get eaten in adventure movies, right?

Mozzie, Port, and Starboard quickly joined us in making a “GTFO, cougar!” ruckus once we got back to camp, and we spent the rest of the evening keeping one eye on our food. It came up the trail and checked us out, and a few of the other women saw the eyes too, but it made no aggressive moves that we observed.

What a way to celebrate the almost-end of the trail, eh?! We left a note the next morning to inform other hikers of its presence. 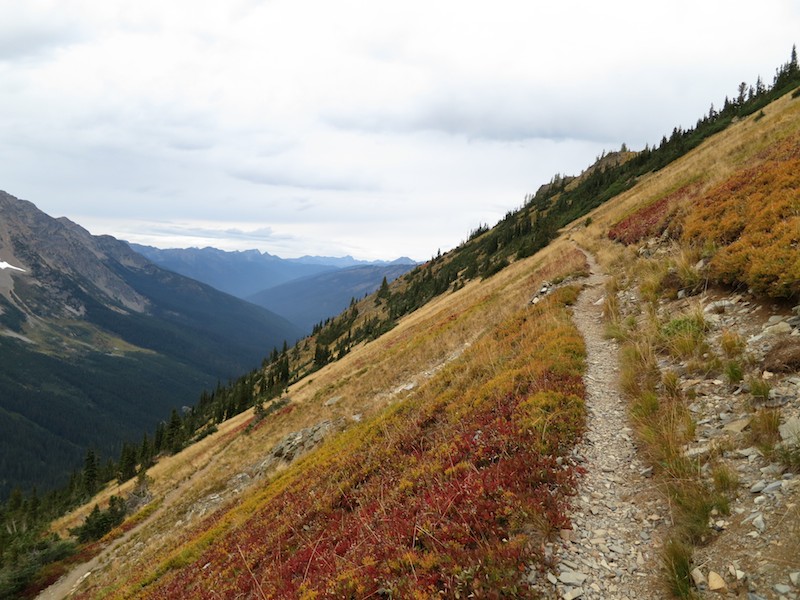 Switchbacking up up up, through huckleberry bushes turning red with the season.

On the second to last day, I finally saw my bear, in the form of a skin and sacks of meat hung from trees between a hunter’s wall tent and the trail.

Having met hikers who saw no fewer than 8 (!!!) bears on the trail, it was a bit of an oddity that I never laid eyes on a single black bear the whole time.

PCT thru-hiking season overlaps with multiple hunting seasons. Bear skin and meat by a hunter camp in the Pasayten Wilderness.

I would be lying if I said I wasn’t disappointed by the “no bear” aspect of my hike. Sure, I had interacted with a bear — that one that scared the crap out of me by crashing around and circling my tent at night when I was camping alone out of Truckee. Hearing one at night has all of the fear factor and none of the fun — bears are beautiful creatures I feel honored to see in the wild, and would love to see from a respectful distance.

Oh, well. I wasn’t entitled to a bear sighting just for hiking the PCT. I will assume, however, I would have seen that particular bear, had it not met its fate several days earlier. 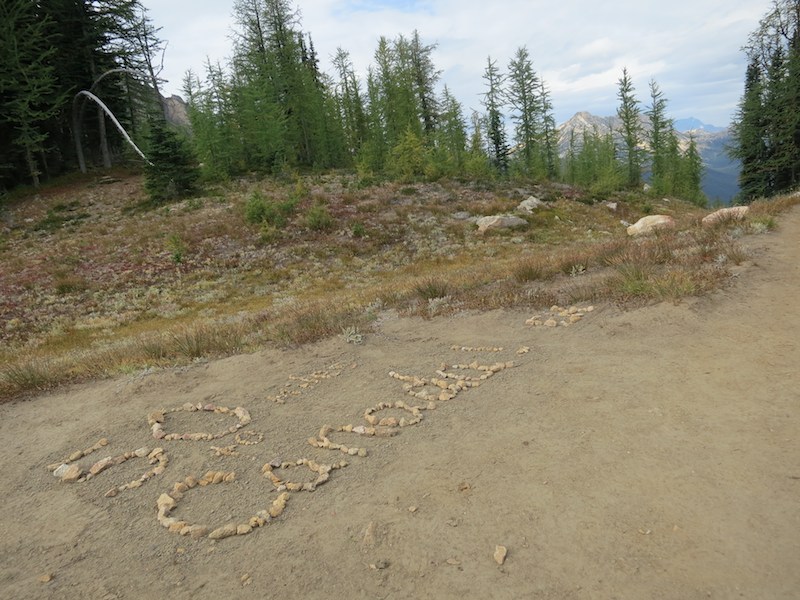 Having felt mentally strong for weeks leading up to the end, I started cracking on the penultimate day. I couldn’t believe the hike was finally coming to an end. I was so close to completing this huge achievement and being in my partner’s arms. I was also out of time to fall head-over-heels in love with trail life and blast through the miles with ease and a peppy attitude.

My Pacific Crest Trail hike experience now was what it was, and I needed to mourn for a moment all the other things the hike could have been. By the next morning, the sadness and fear had been processed and replaced by joy, pride, and EXCITEMENT.

Because my hike was fucking amazing. 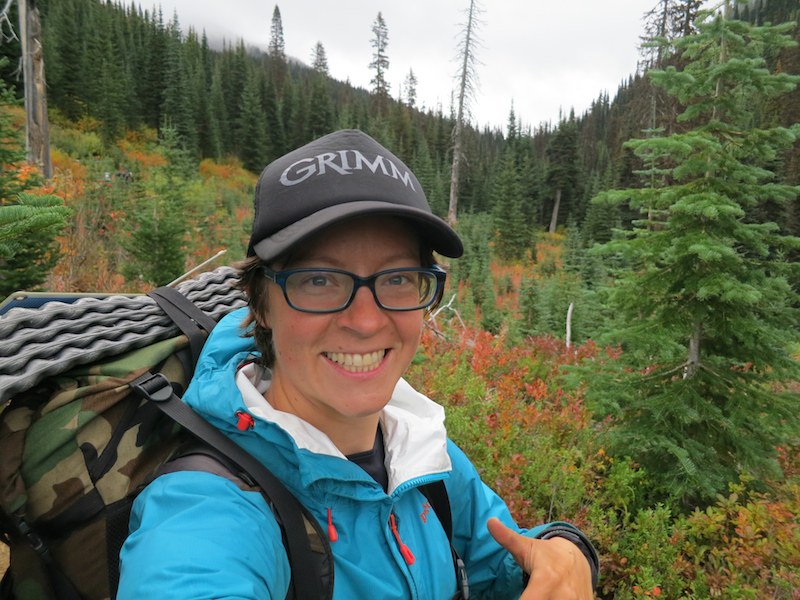 Only a few minutes from the end of the trail, my mood could only be described as “stoked”.

I remember not a whit about the last day before reaching the monument. We flew the 11 or so miles to the border, and suddenly we were in the clearing, there was the monument, and I had hiked the PCT. FUCK YEAH.

One of the best parts of my final day on the PCT was sharing it with great people. The four hikers I walked into that clearing with are strong supportive badasses, and I loved finishing out this epic journey in their company. 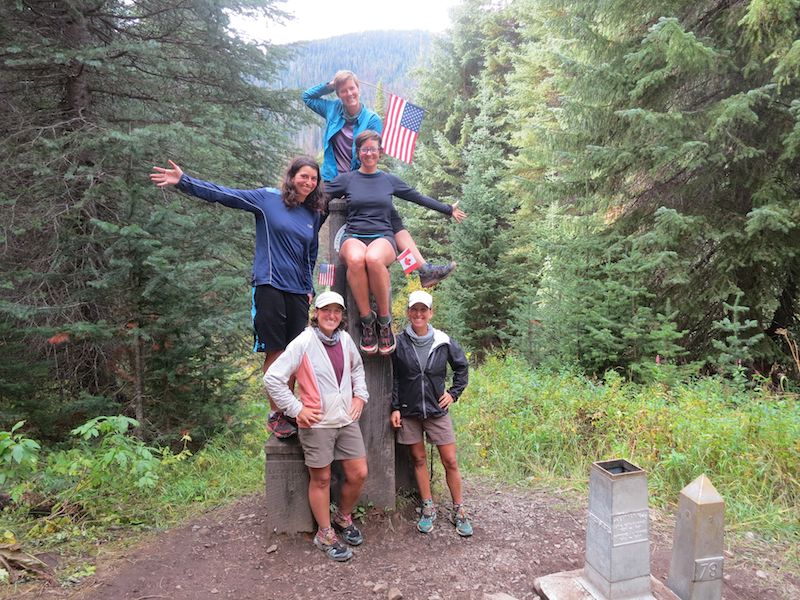 The incredible hikers I finished the PCT with: (clockwise from the top) Mozzie, me, Starboard, Port, and Emu.

Despite a mostly socked-in last section, the sun came out and shone on our monument photo shoot. I flipped through the register, attempting to count previous hikers before giving up. Too many flip-floppers and sectioners to make an easy accurate count of full thrus, and what did it matter? 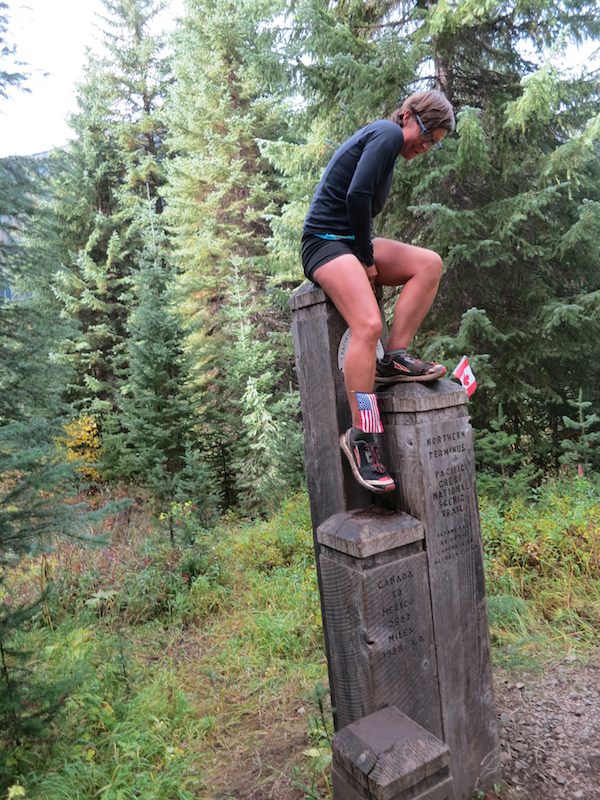 Climbing down from the monument, oh so carefully. Not worth falling on the last day!

I wrote an entry, drew one last disfigured hiking penguin, and was done.

The Hiking Penguin and some chicken scratch. To read the first half of my comment, you’ll have to go to the monument.

From April 13th to September 19th, I had walked a continuous footpath (mostly) on the Pacific Crest Trail from Mexico to Canada. 5 months and 1 week. 160 days. 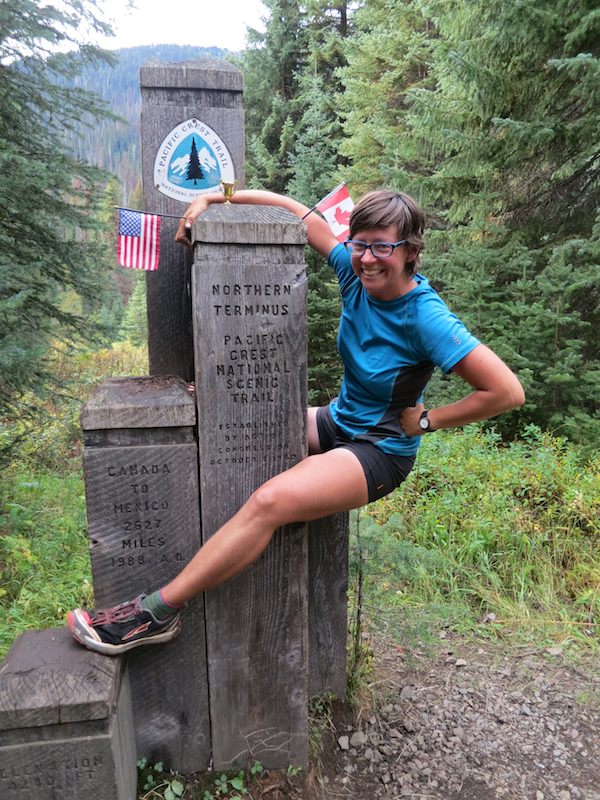 I didn’t realize how girth-y the monument was until I climbed up there. Twss?

The cruel little joke of the trail is that once you’ve hiked to Canada, you then have to hike another 8-9 miles on trail, forest roads, and highway to get to civilization at Manning Park.

I may or may not have spent that last section contemplating how many dollars I would pay a taxi service to come pick me up as soon as trail turned into navigable road (at least double, if not triple, digits). 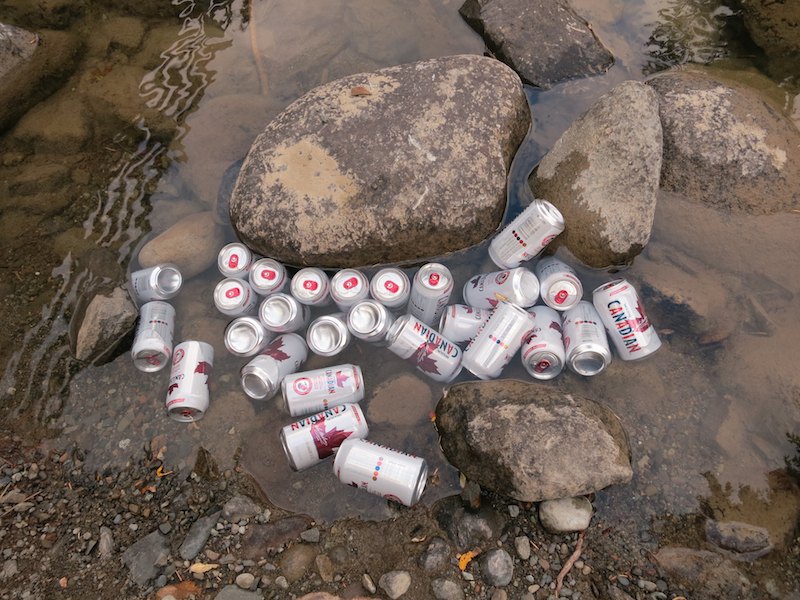 A trail angel provided a creek-chilled beer cache (a.k.a. manna from heaven) by the highway that lead to the Manning Lodge.

Manning Park felt like a resupply stop through the veil of coming down from some potent, life-altering drug trip. My civilization mind turned on rapidly in the whirlwind of hostel rooms, burgers, beer, saying goodbye to my trail friends, a fancy greyhound bus, and all the scrumptious dumplings and Thai food I could cram down my gullet in Vancouver.

I had called Russell from Stehekin with my definite Vancouver arrival date, and he had reserved me a room in town and a direct flight home the next day.

It was over. I had succeeded in the goal I set out to achieve: to walk from Mexico to Canada in one season. Bam.