Washington State was the most difficult and most beautiful section of the PCT for me. It was the state where I ran out of food, shivered in sub-freezing winds, and saw yet another cougar to scare the crap out of me. It was also where I found the courage to start camping alone again, where I discovered I could walk uphill forever, and where I saw so much jaw-dropping, wondrous, magnificent, awe-inspiring, spectacular beauty, that I ran out of adjectives and was reduced to staring with wide eyes and maybe a touch of drool. 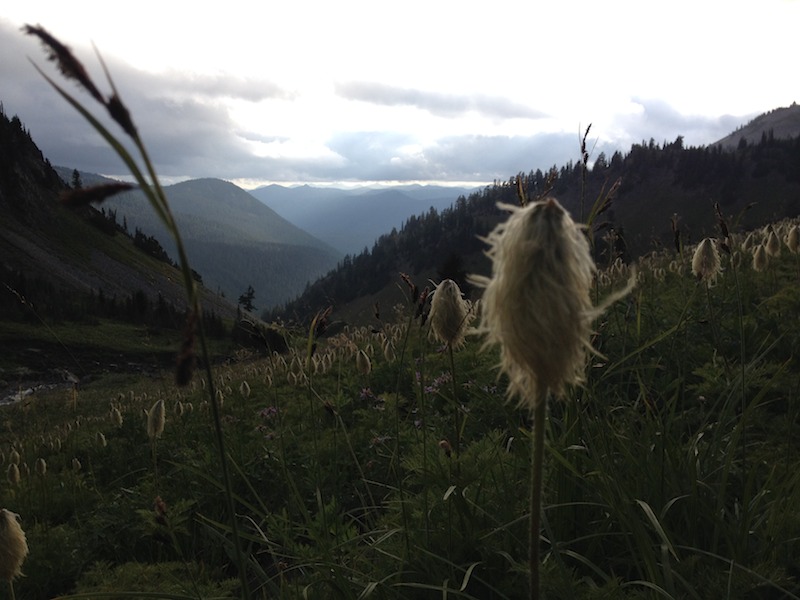 My mother, sister, and grandmother came out to Cascade Locks to visit me and bring my resupply box of food and equipment. The end of Oregon was a morale low point for me, though the scenery was getting more and more beautiful every day. I didn’t trust myself to return to the trail if I went into Portland, so was grateful they were willing to come out to me.

I nero’ed the next day in Cascade Locks and hiked out in the evening with Emu and Mozzie, across the steel grate Bridge of the Gods. There’s no protected pedestrian path, and this is one of the few bridges across the Columbia River in the gorge, so you’re walking next to semis and zooming pickup trucks.

I grew up just a few miles north of the Columbia River, and it has always seemed standard-river-sized to me. After walking from Mexico without crossing a single river as large, though, I finally saw the river for what it is: a broad, deep, massive behemoth. 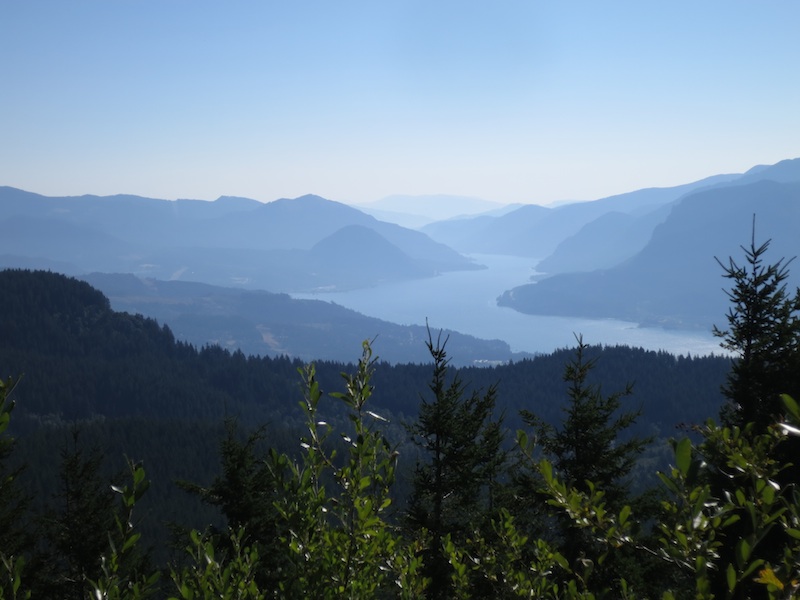 The section from the border to Trout Lake was up and down with plenty of tree cover. After the minimal elevation change of Oregon, it took a bit to get used to climbing more each and every day, and my mileage dropped accordingly. 20 to 25 became the new normal, down from 25-30. From the first few ridges, I could see Mt. Hood and even Mt. Jefferson behind, and Mt. Adams up ahead. Emu’s birthday was the night before we reached Trout Lake, and the rest of the group arranged a party in the woods, complete with a raging fire, tiny bottles of liquor, and a burrito bar. 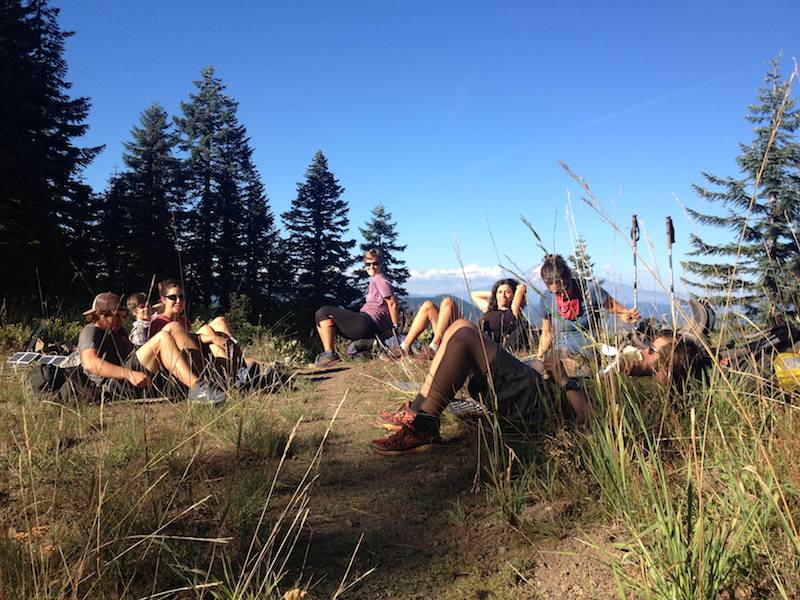 Hiking into Trout Lake, my morale was still flagging, and I decided to spend a night in the town rather than hiking out with the group that afternoon. I had gotten a ride from the trailhead from a gentleman who ran a church camp in town, and he’d offered me a place to do laundry and spend the night (and the keys to his car, and food — very generous family).

After picking up a sweet dorky trucker hat and new pee-rag for pennies at the Annual Trout Lake Rummage Sale, I did laundry and stayed in a lovely room while my hosts had a family reunion next door. I joined them for a cafeteria-style breakfast the next morning, and got a ride back to the trailhead.

During my relaxing night in town, I mulled over my morale and came to the realization that I had hit my personal limit of being around other people all the time. My inner introvert was exhausted and my grumpiness was starting to surface, hard. I knew I would miss the awesome people I had met in Oregon, but I needed to go solo again to restore mental balance. Thankfully for my still-robust animal fear, many hikers were going the same approximate distance each day, so it was a simple matter to hike solo during the day and find folks to camp with each night.

The first day out of Trout Lake was drizzly and cloudy, the wettest day on the trail so far. I hiked past where Rocket Llama got stuck for 8 days in the snow last year, remembering her story of hearing choppers overhead, and eventually knowing she’d have to rescue herself or she was done for (which she then did, because she is the baddest of asses). I felt the weight of the two gas canisters I was carrying Just In Case and was comforted. The trail took me around the west shoulder of Mt. Adams, north towards White Pass, into the Goat Rocks Wilderness. 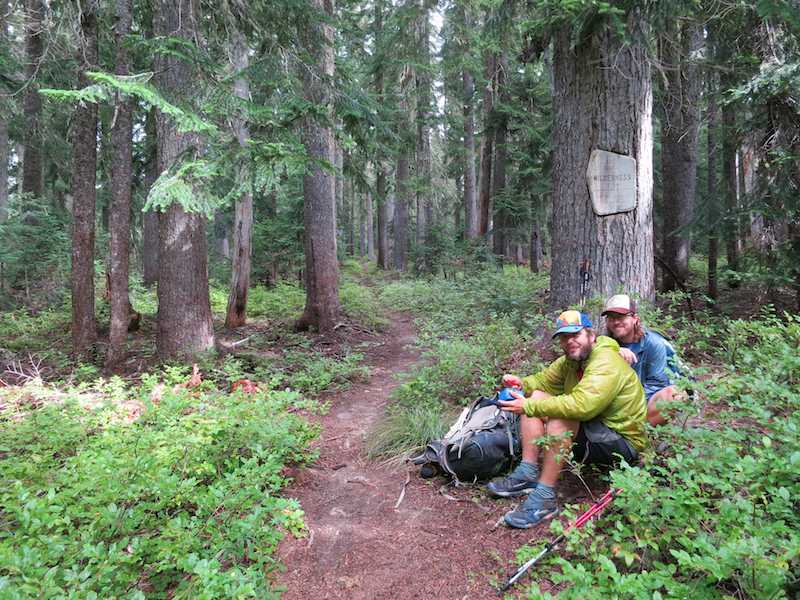 Star Rider and Brent at the entrance to Goat Rocks Wilderness.

Passing through the Cispus River valley, rays of light broke through the ceiling of clouds and made bright spots on the forest below. I met Devilfish on the trail (for the first time since north Yosemite) as he was goat-watching, and he pointed out a herd with kids, gamboling and butting each other on the rocks. 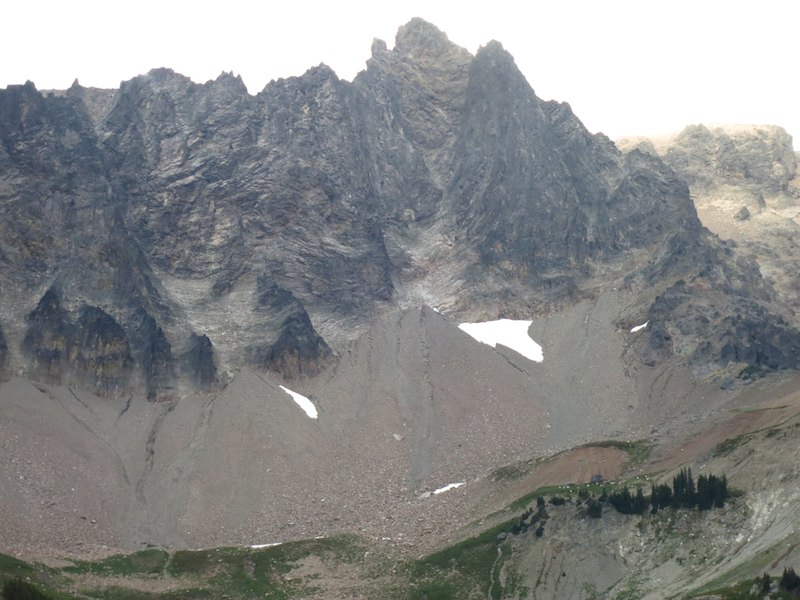 Goats in the Goat Rocks, bottom right above the pointy trees.

I camped by Bunyan and Oklahoma that night and took off in the morning for the infamous Knife’s Edge. The trail splits in two below the peak of Old Snowy, the lower official and equestrian trail cutting across the side of the mountain before rejoining the hiker alternative for a looong ridge-walk. The hiker alternate goes up and over the peak. I’d been hearing about the spectacular views from the hiker route, and since I was going through on a crystal-clear day, felt almost obligated to do it.

Amazing though it was, that shit was the sketchiest trail since the snow-covered Sierras. Snow, ice, precipices galore — it was like Glen Pass Redux: this time with no company! 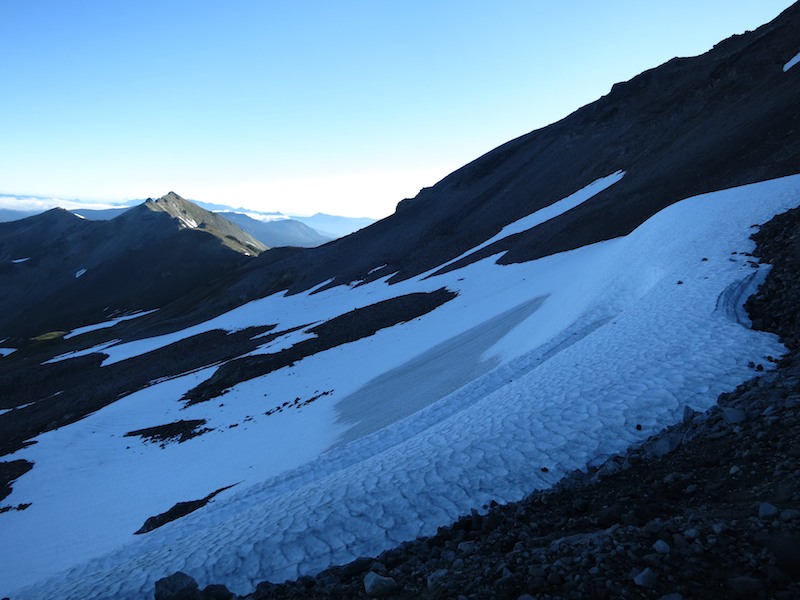 Snow and ice near the hiker alternate by the Knife’s Edge.

After getting a third of the way up an ice field with no microspikes, I reached a point where my trail runners had zero traction, and so walked backwards down my footprints off the ice, my heart in my mouth the whole time. Being scared shitless really does wonders for being In The Moment. Some boulder scrambling and more ice-walking later, I had 360° views of Mt. Adams, Mt. St. Helens, and Mt. Rainier. Worth it. 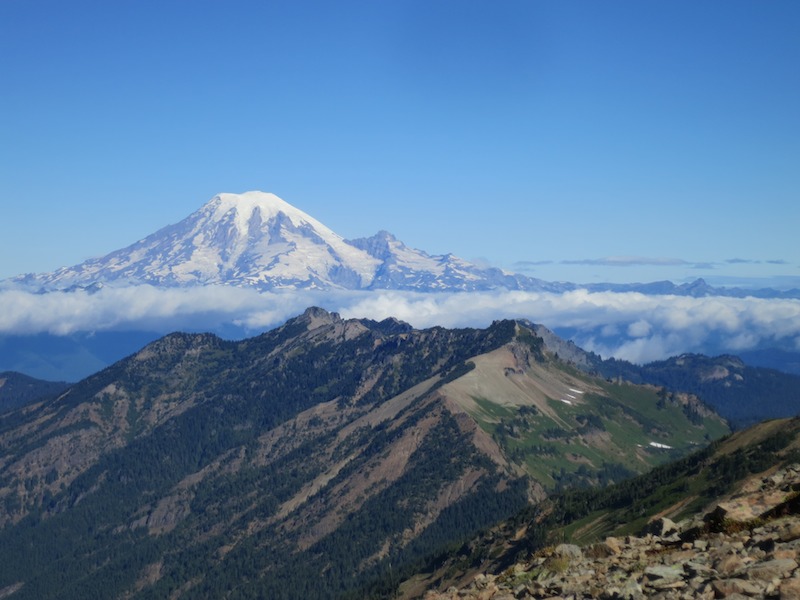 Mt. Rainier from the Knife’s Edge.

The rest of the Knife’s Edge ridge-walk was nerve-wracking enough to make me turn off my audio book, take out my single headphone, and focus on one foot in front of the next. I’ve never gotten over my fear of heights, but I got better at living with it.

I hiked into White Pass at the end of that 20 mile day, to find the that package I expected was not there. Well, they said it wasn’t there, so I waited until mail time the next day, and when it still “wasn’t there”, I politely asked to go back and look for it myself. Found it quickly, listed under the name of the sender. It was my new rain jacket, sent up to replace my hole-y old Marmot just in time for the real wettest day of the trail. I stayed overnight at the Village Inn, enjoying the luxury of the little condo room and seeing friends — the Australians and the rest of the Oregon crew had been delayed a day by sickness and were there when I arrived. 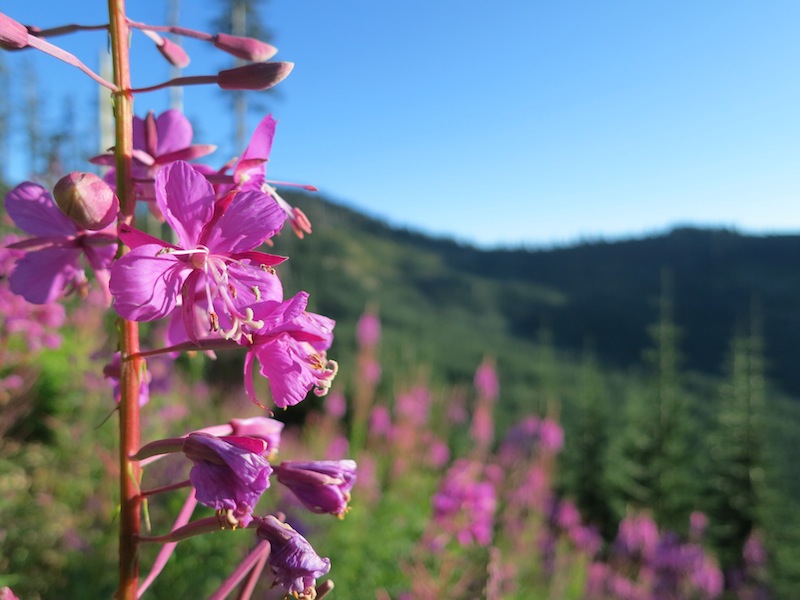 It rained and rained the next day, and I procrastinated leaving until 2 pm. Still hiked 16 miles before full dark, finally making camp right up next to Bunyan’s tent in the last spot for a few miles.

I reflected that day on how much my hiking had changed since Mexico. In steadily pouring rain, I just kept going, because what else would I do? And I kept going at nearly 3 mph, a pace I didn’t even attempt until Oregon. I also straight-up cooked inside my tent, and in the morning managed to pack everything up before getting out of the tent to pee. Hiker skillz, y’all.

Atop the last ridge before Chinook Pass, I spread out my wet gear and ate lunch while I willed the first sun in miles to dry out my bag and tent. The Oregon crew caught and passed me here, and I hiked with them past the entrance to Mt. Rainier National Park and up from the pass. We saw three silver-backed hoary marmots; I mistook the scream of one for a hiker blowing a whistle. SO. LOUD. 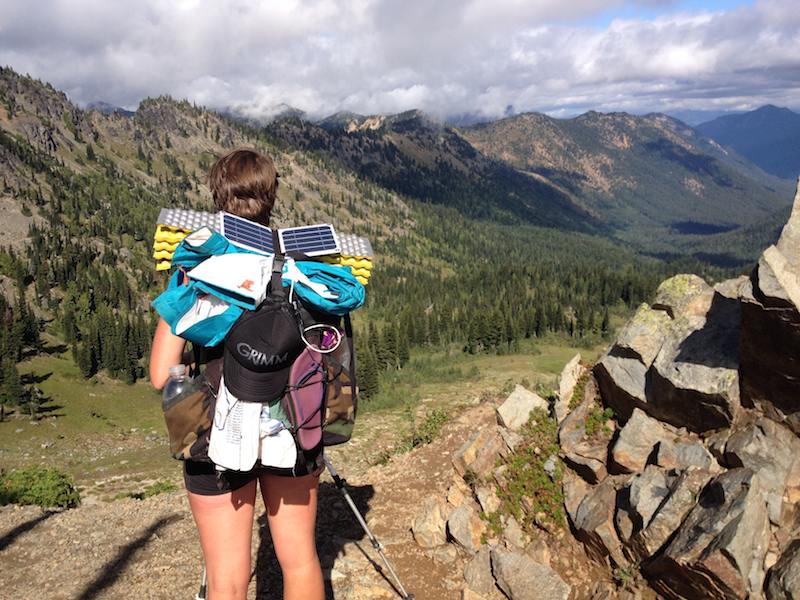 Me & my backpack, after hiking out of Chinook Pass.

That week was archery hunting season, and I passed a dozen or so parties of hunters on the trail, kitted out in camo with compound bows in their hands or on their backs. Several asked if I’d seen any elk (I hadn’t, only tracks and scat), and a couple of guys in a wall tent with a wood stove offered food and hot tang. I felt a bit nervous with my camo backpack, but at least it wasn’t rifle season. 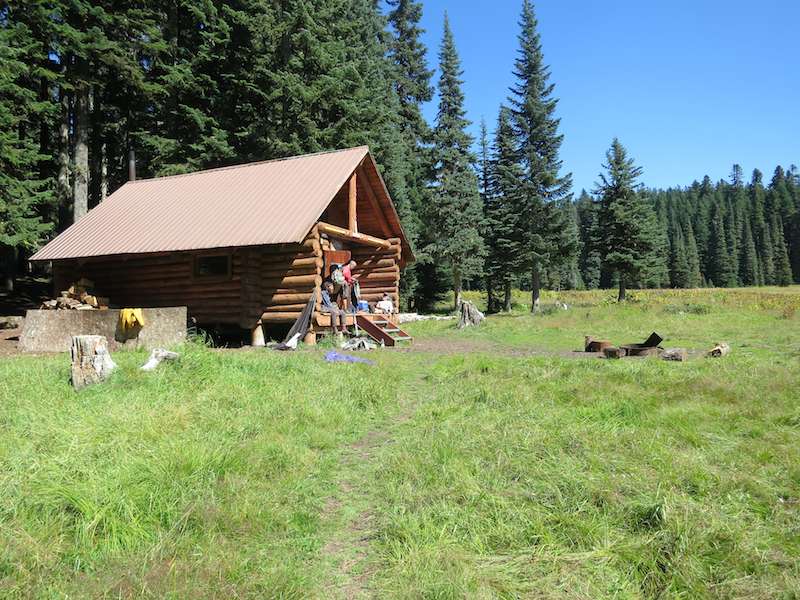 Hikers taking a break at the Mike Urich Snowmobile cabin in Government Meadow.

Two days out of White Pass, it got cold. I’d slept in a depression and frost greeted me upon waking. My fingers were almost numb by the I got my tent rolled up and packed away. I hiked fast to keep warm.

Amid the ferns, moss, and mushrooms, blueberries and huckleberries abounded; my fingers and lips turned purple as I grazed as I walked. 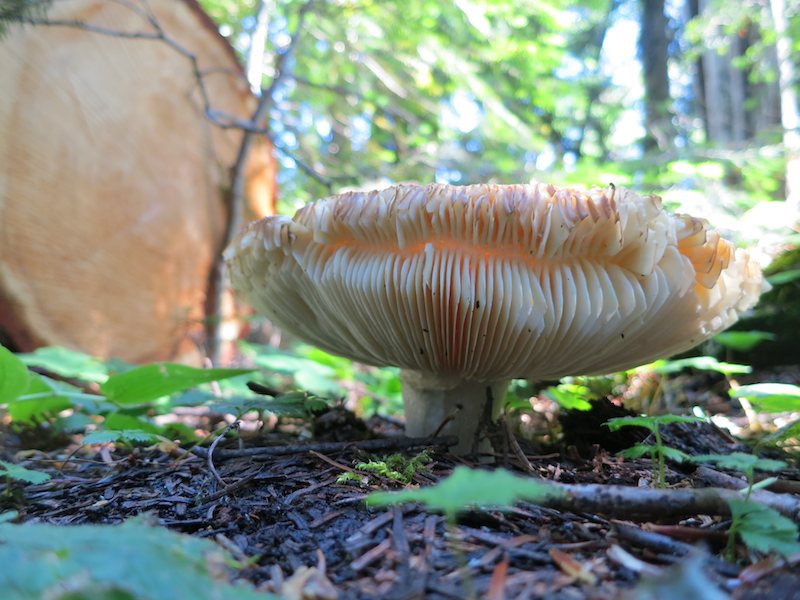 I’d heard from a sweet couple of section hikers that there was trail magic at Tacoma Pass, and managed to get there at the end of a 27.5 mile day. The big crew was there, along with Zissou and Midway. Not Phil’s Dad (the dad of Not Phil) had a canopy, camp chairs, chili, beer, soda, and muffins; basically, all the amenities one could ever want. 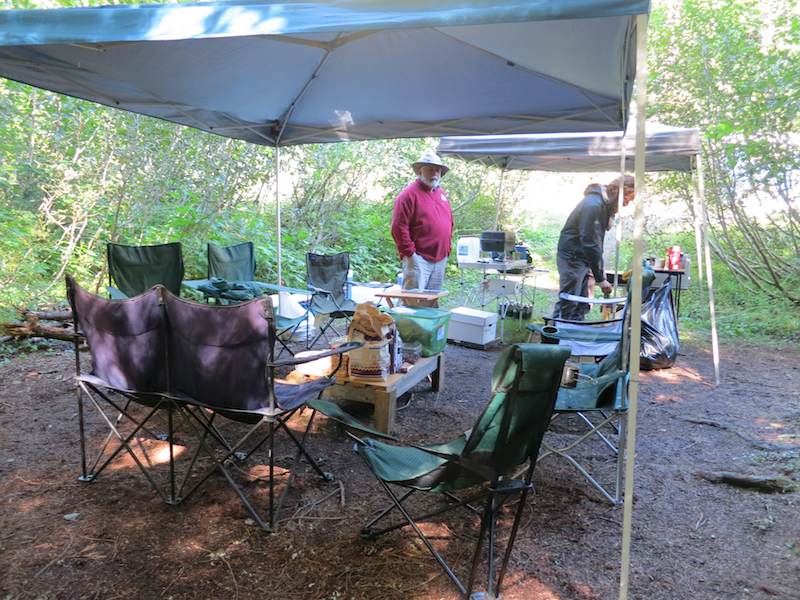 Not Phil’s Dad and his Tacoma Pass trail magic, with Zissou.

After a luxurious morning sleeping in late and drinking so many packets of hot chocolate (thanks, Not Phil’s Dad!), I rolled out and split the mileage to Snoqualmie Pass into two days. I camped with Zissou and Oklahoma that night, sharing their fire as they helped me drink the tiny bottle of rum I’d been carrying since Cascade Locks. 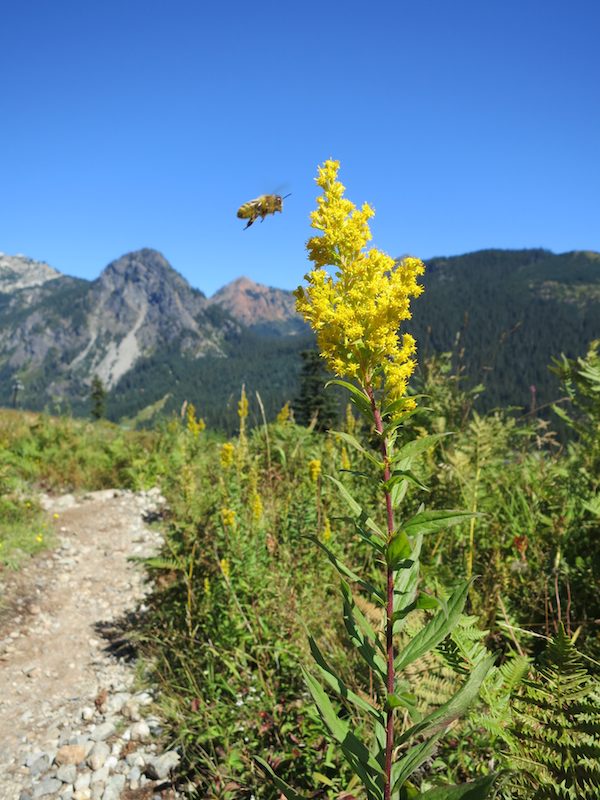 Bee over goldenrod on the Snoqualmie Pass ski slope.

The next day I hiked down through ski-lifts and fields of wildflowers to Snoqualmie Pass. I was now halfway through the last state of the PCT.