Up the Goldmyer Hot Springs Alternate to Stevens Pass

From crossing I-90 at Snoqualmie Pass, through Stevens Pass and the Lake Chelan resort town of Stehekin, and on to the Canadian border, the hike got seriously difficult. Night was falling earlier, and dawn came later. Daylight dwindled, as did my food supplies each section. At this point in the hike, though, I had no doubt I could make it. 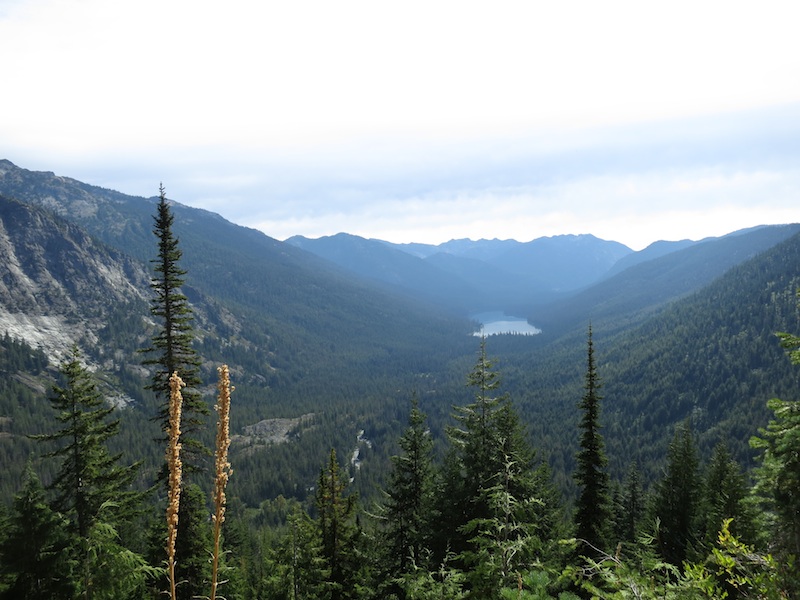 Long views from a ridge before descending, on the Goldmyer Hot Spring alternate of the PCT.

There was something so grounding about seeing I-90. I once drove it all the way to Chicago in a UHaul with my two roommates, a cat, and a bird. Good times. Crossing it reminded me that the Pacific Crest Trail exists in the real world. Here, and throughout Washington, every time I passed a road, I would think about the city off to the west or east. Tacoma, Seattle. Methow Valley, Gold Bar, Leavenworth. So many places I know and love.

At Snoqualmie Pass, my dear friend Julia and her beautiful family drove out and resupplied me. You guys, she brought me *two new pairs of Darn Toughs*, maps for the next section, homemade muffins, fancy beef jerky, and her husband included a paper bottle single-serving of wine, because they know what hikers need. Thank you Julia and Aaron! 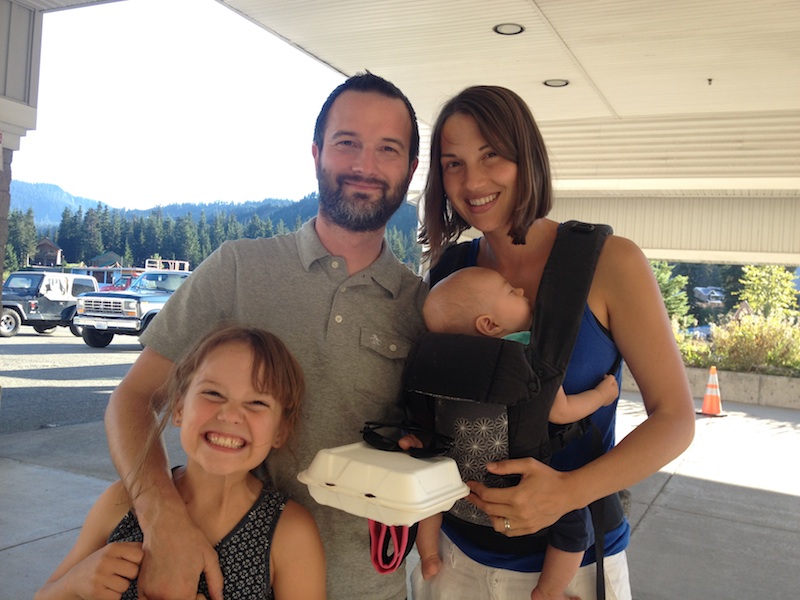 My incredible friend Julia, her husband Aaron, and their beautiful little ones joined me at Snoqualmie Pass.

Many hikers had converged on the Summit Inn that night, and I got to catch up with old friends and meet some new. Port and Starboard were there, whom I had met briefly in Ashland OR, and Zissou, (the real) Cheese Snake, Oklahoma, Masshole, Sideways, Moonshine, Fern-toe, Thor, and others. A handful of us walked toward the Goldmyer Hot Springs alternate (it cut off 10 miles — OF COURSE I WAS DOING IT) in the morning, and I left a few minutes before the rest.

The first part of the alternative, from the pass to Snow Lake, was a popular day hike, and this was a Sunday. It was crowded, y’all. So. Crowded. I passed the time stuck behind slow dayhikers by goggling at all their clean hiking/outdoor gear. And they really do smell strange (good?) too.

The only actual bad part was that I had to pee for SO LONG before the crowd thinned out and I could find a tree to water. 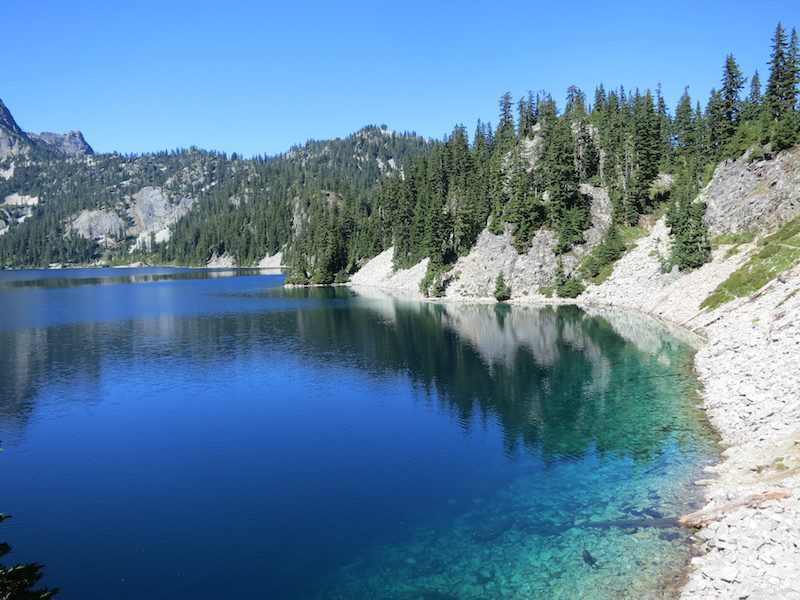 The popular Snow Lake north of Snoqualmie Pass on the Goldmyer Hot Spring alternate of the PCT.

All I could think about was getting closer to Canada, so I kept going a few more miles past the hot springs that night. This put me out of sync with my buddies behind me, and I camped alone that night, and the next. I only saw one other NOBO, Pound Cake, the entire section. I hadn’t actually camped alone-alone since the mountain lion incident after Hat Creek Rim in California.

I was so nervous of being eaten (and thus not finishing the trail, oh, and being dead) that, despite living outside for almost 5 months, I couldn’t get myself to leave my tent to cook dinner. I ate some bars and huddled in my sleeping bag, imagining All The Cougars and Bears hanging out outside, waiting for me to do … question mark? Not my strongest moment. 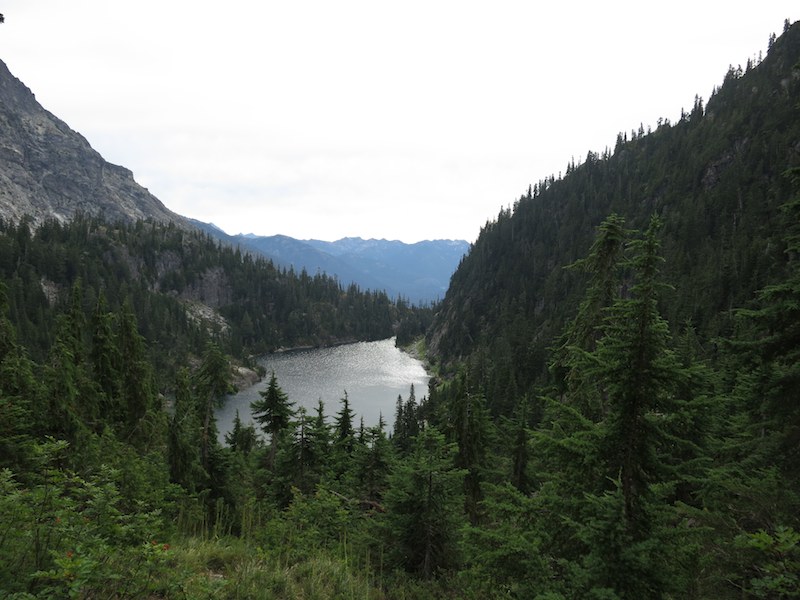 Descending to Lake Ivanhoe past the Goldmyer Hot Springs on the way back to the PCT.

To add insult to (imagined) injury, I felt little feet running across my body in the middle of the night. Good thing no one was camped nearby, or they may have been woken by my sporadic thrashing and bellowing “get the fuck out, mouse”. I found the silver-dollar-sized hole they’d chewed in the tent the next morning. They nibbled at my day-food bag, but didn’t consume any actual food.

The next night they visited again and pooped in my plastic Bend Brewfest mug, for which they will never be forgiven. I don’t care that it definitely had hot chocolate residue — that was just rude, mice. 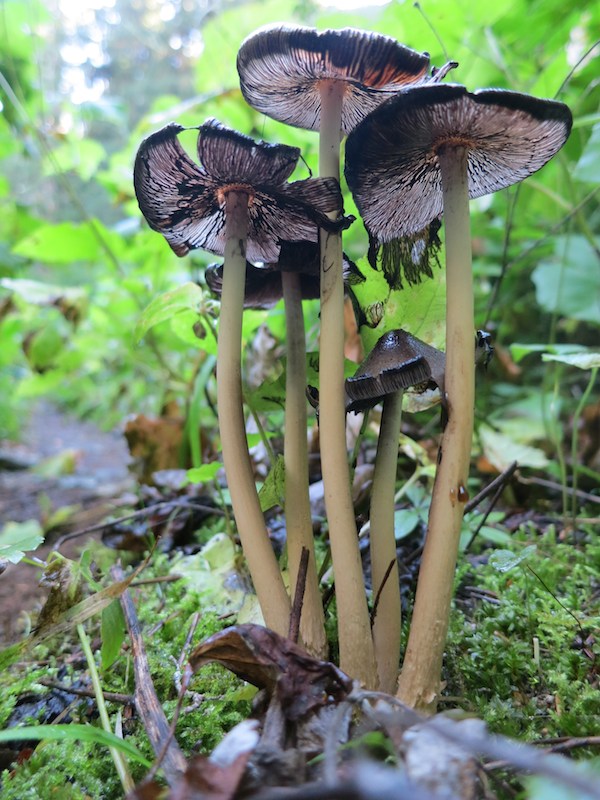 Tall skinny fungus among us.

I met the youngest hiker of the season — Buddy Backpacker — and his family the next day. There was a ford reputed to be dangerous at mile 2452. I came up from the south and crossed the first bit on some treacherous logs. A family was eating dinner on a big pile rocks in the middle of the creek — a woman, a man, and a young boy with a stuffed Pooh Bear.

My first impulse was, “Hey, another hiker with a stuffed animal!” and to fist-bump him, but was so startled to see a child on the trail that instead I said “are you day-hikers?” in a confused tone. 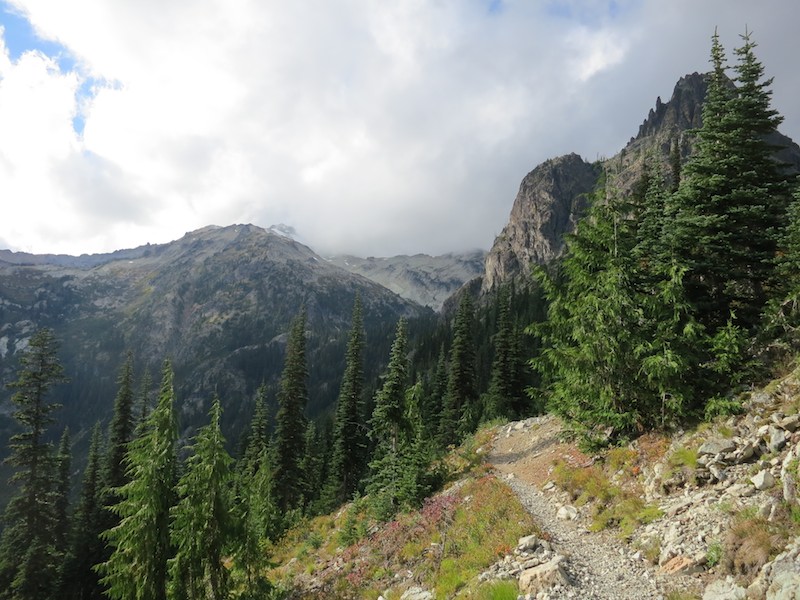 Light and clouds make the trail dramatic as it crosses a hillside south of Stevens Pass.

It wasn’t as bad as when I asked R.D. (the amazing first female yoyo’er) if she was German (she is Irish), but up there on the foot-in-mouth scale. The woman responded that they were thru-hikers who had flip-flopped, and I put two and two together. We chatted a bit, and they told me that Coppertone was handing out his last root beer floats at Stevens Pass.

Motivated one hundred percent by the thought of a root beer float, I flew down the last miles into Stevens Pass the next day. Coppertone had cinnamon rolls as well as floats, and confirmed that that was his last stop. His smiling face (and tanned exterior) had greeted me at Deep Creek, Acton, Tehachapi, Lake Isabella, Sonora Pass, Echo Summit, Hat Creek Rim, and now Stevens Pass, making him one of the stable anchors of my trail experience. 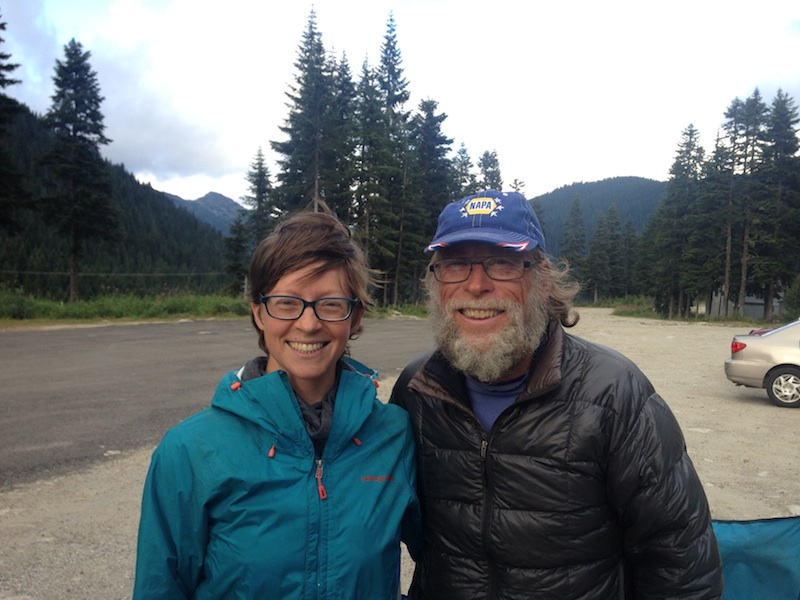 One last visit with my favorite trail angel: Coppertone of the Root Beer Floats.

Thank you, Coppertone, for your generosity and company along the trail. You never failed to brighten my day (and inspire my mileage).

From Stevens Pass, the parents of a cheerful Australian SOBO sectioner, Camel, gave me a ride to the Dinsmore’s place in Baring, one town east of my childhood summer camp. There I encountered a rare resupply box issue — the USPS had sent my priority mail box, shipped by my husband from California, via Nashville Tennessee, and it had not yet shown up in Baring. I crossed my fingers that it would arrive the next day and settled into an evening at Hiker Haven, the last major trail angels before the border.

The Dinsmores have an extensive loaner-clothes box, and someone (Mike and Mika?) found a one-piece footie pajama with a penguin on it, so naturally I wore that the entire time I was there. 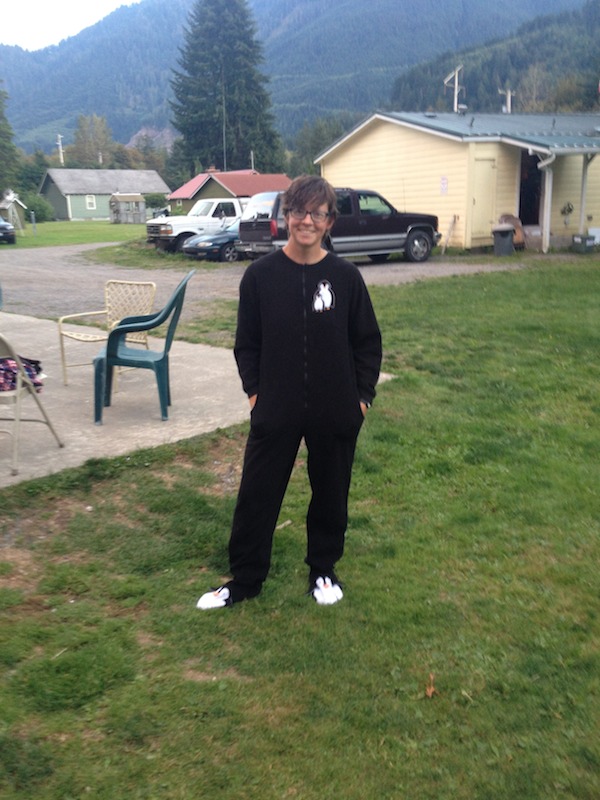 My mind was on vacation during that stay — I did laundry the first night, but forgot to press start, so managed to dry my sweaty, unwashed clothes, before realizing my error and washing everything again (for real) the next morning. Other than failing at basic machine operating and wearing real person clothes, I had a nice time catching up with Coyote and Don’t Panic and meeting several flip-floppers SOBOing from Canada.

Jerry Dinsmore took me into town on his post office run the next morning, and my box was there. THANK THE TRAIL GODS. I stayed in Skykomish to sort the box and get any additional supplies before heading straight back to the trailhead with Beer and his cousin. Next stop, Stehekin.

→ Next: Stevens Pass (mile 2476) to Stehekin (mile 2580): Through Glacier Peak Wilderness to Stehekin