558 miles — that’s how far I’ve come on the PCT now. I passed the 500 mile mark during the third and final road walk around an official trail closure, and the 20% mark (~532 miles) just before the Cottonwood bridge. Before starting this trail, I was nervous about walking all 700 miles of southern California, and it’s a little hard to wrap my head around being almost done with it.

Since leaving Agua Dulce last Wednesday, the trail has been hot & dry, with wind strong enough to blow me over (for reals, I got knocked off the trail a few times), and not much wilderness feel. I camped at Tylerhorse Creek the night before getting into Tehachapi, and that was the first camp I’d made where there was no outhouse or toilet since Cajon Pass at mile 342 — two hundred miles earlier. The upcoming stretch of roadless wilderness in the Sierras is looking so good right now. 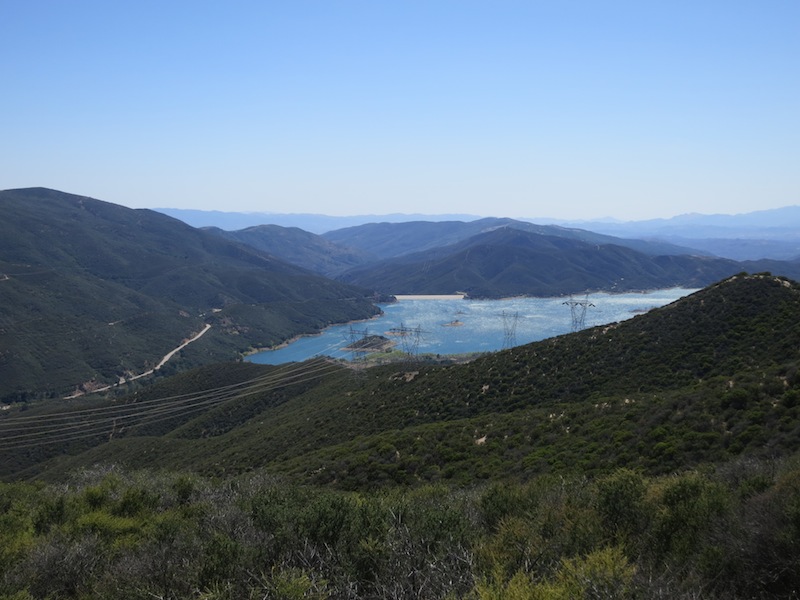 After spending two nights at the Saufley’s Hiker Heaven trail angel place in Agua Dulce, I walked 24 miles straight through to the Andersons’ Casa de Luna in Green Valley. Though the morning was hot, the day was lovely. It was mostly easy ridge walking through relatively lush green canyons, with a view of a Bouquet Reservoir for a sizable chunk of the day. The Andersons were gracious hosts, serving taco salad and a pancake breakfast to all the hikers. They have a spectacular manzanita grove camping area — picture little campsites placed under surprisingly tall manzanitas, each a different size to accommodate a variety of sleep setups. I found the perfect little bivy spot and had one of my best sleep nights on the trail so far. These two trail angel spots are so different, and yet both so wonderful. 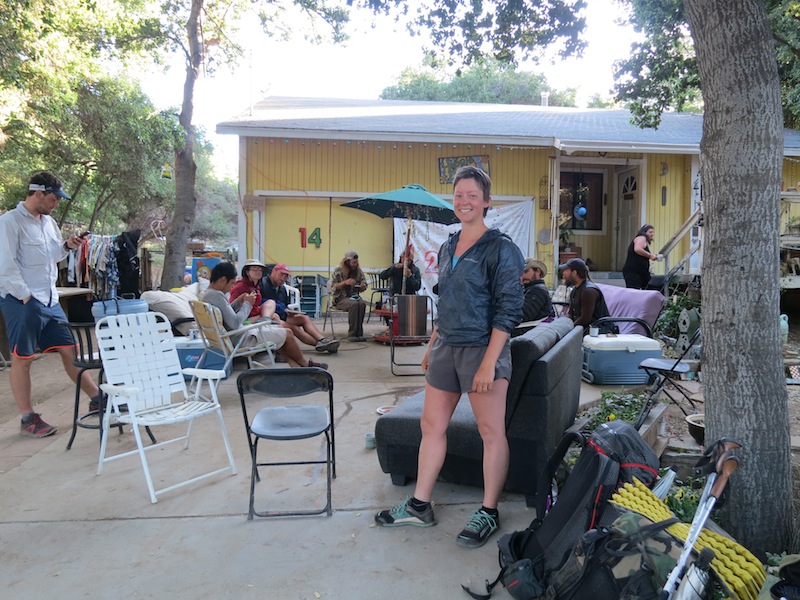 Getting ready to leave Casa de Luna in Green Valley (the Andersons).

The third and final official closure on the PCT was last June’s Powerhouse fire closure that shut down the trail from mile 478 to mile 511. There were several alternate routes suggested on the PCTA website, and I chose to do the first option: a 19-ish mile road walk down San Francisquito Rd to Lake Elizabeth Rd, then down Pine Canyon Rd back to the PCT. It wasn’t an accident that this route took me by a biker bar joint where I could get a tasty breakfast (I heartily endorse the food at the Rock Inn). I also shamelessly charged my phone there, and did my annual 10 minute viewing of Fox News. Turns out, Nascar? 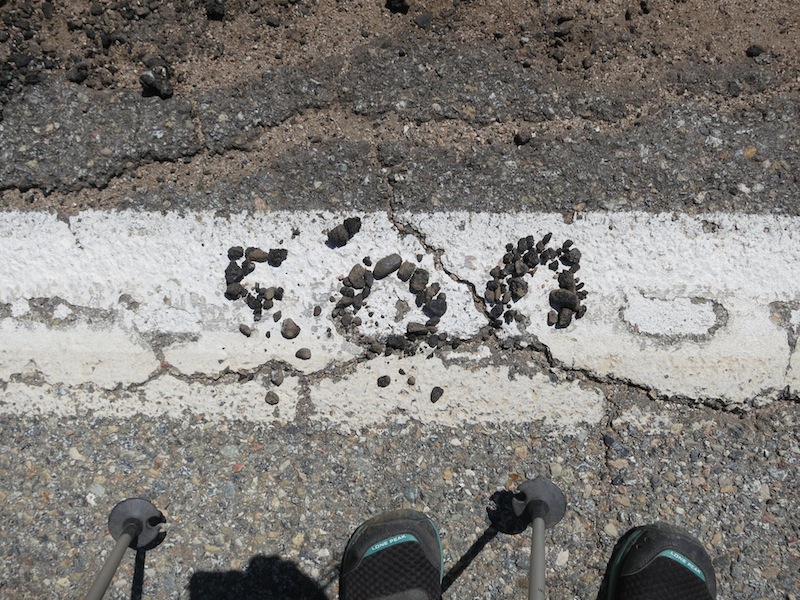 Someone had made a 500 mile marker along the Lake Elizabeth Rd detour route.

The road walk was hot and dusty, and I got three new blisters over the course of it, but it felt good to maintain my commitment to a continuous walk to Canada. I’m getting less and less “purist” about the trail as I go along — take a detour for food? sure! — but between that Idyllwild road walk, the endangered species one, and this one, I’ve at least managed to keep a continuous path north, even if it’s not all the PCT. It’s a little thing, but it feels good to me. Many, many hikers are hitching around, and I don’t blame them at all. The damage the road does to my feet is not insignificant. To each their own, though, eh? HYOH and all that. It was also fun to leap frog with the other hikers doing the road walk that day — Baby Wipes, Midway, Sideways & Moonshine, and Professor. A family living about 3 miles from the end of the road walk had a sign out directing PCT hikers to use their garden hose for water, which was such a nice surprise and relief, as I’d been down to 1L of H20 with 9 miles to go.

After getting back on the trail, I did a 6 mile hike through the Tejon Ranch section of the trail, where you’re not allowed to camp. With my energy flagging, I remembered that sometimes going harder is easier than trudging along, and started jogging the downhills. My strength and spirits picked up hugely at that, and I jogged the whole rest of the way down to Hwy 138 and the trail angel stop called Hikertown, getting in around 8 pm. It was dark, I was tired, and I could barely manage to shower and cook food before crashing outside the trailer I was assigned to sleep in. A large cricket was hanging out on the mattress in the trailer, and I lacked the motivation to press my claim. Or maybe I just like sleeping outside better these days; hard to tell.

The next section was the notorious aqueduct walk — 17 miles on the LA aqueduct, supposedly hot as hell with no shade. Lots of hikers I knew were doing this section at night, but night hiking hasn’t sounded worth it to me yet (when would I sleep?!), so I did it during the day. I managed to get up and out of there by 6 am, and promptly saw my first rattlesnake at about 6:15. I couldn’t see the tail and rattle, so wasn’t sure at the time, but the color and pattern made me suspicious and I gave it a wide berth. The little guy didn’t move at all. I have since Googled it, and it sure looks like a Mojave Green, the type of rattlesnake with both hemotoxin AND neurotoxin. Twofer! 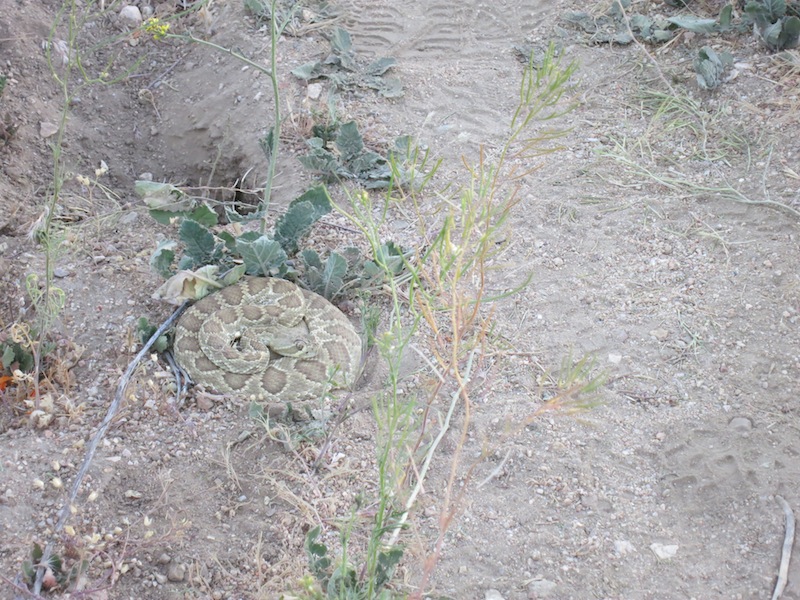 A mojave green rattlesnake beside the PCT just past Hikertown.

The aqueduct walk was not as bad as I was expecting. Because it was so flat and level, I was able to walk fast — almost 3 miles an hour for multiple hours. I came close to “10 by 10” — 10 miles by 10 am. I didn’t have a problem finding shade for breaks every few hours; manzanita trees and big sage bushes gave me the shelter I wanted. And I didn’t see a single other person on the walk, so was able to belt out renditions of Jesus Christ Superstar songs to my heart’s content (Heaven on Their Minds, anyone?). I arrived at the water and shelter landmark — Cottonwood Bridge — at about 2 pm, and after eating a quick lunch of string cheese and summer sausage, passed out for several hours in the shade next to some other hikers. 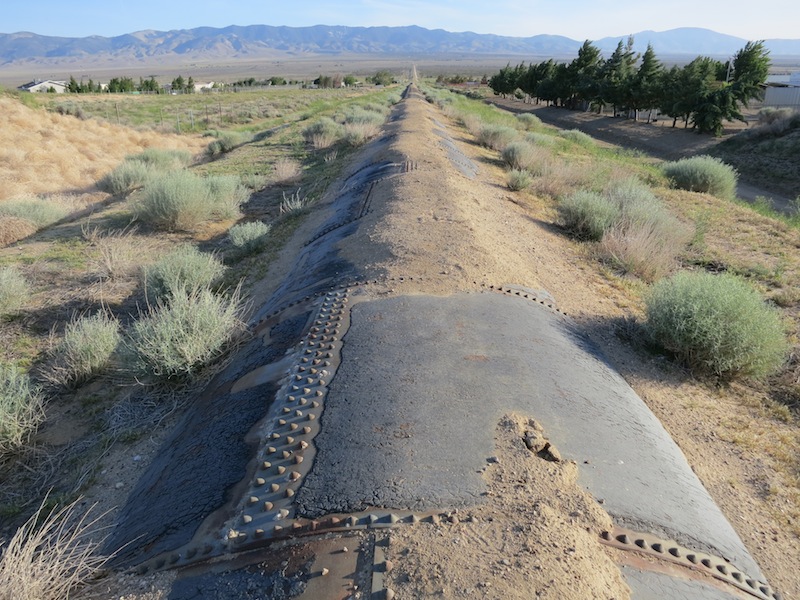 The first (and older?) part of the aqueduct. The rest was flat cement.

Once the temperature dropped a bit, I headed out towards the next water 6 miles later, and quite a climb up from the valley floor. Though the wind made a long series of valiant efforts to knock me off the ridge (the term “gale force” was ever-present in my mind), I stayed mostly upright, and only had to go down a slope to retrieve my sunglasses once. I pulled into Tylerhorse Canyon around 7:45 pm, and enjoyed my first hot chocolate of the trail as I listened to the creek gurgling and the wind howling. I slept all the way through to 6 am that night — a first on the trail. Guess I’d been super tired from the restless nights at trail angel houses (except at the Andersons’), or perhaps I’m getting better at sleeping outside. Either way, I rose well rested and excited for the day.

The next day continued the climb out of the Lancaster (Antelope?) valley, then down towards Tehachapi, through a large burn area carpeted in purple wildflowers. A lovely water cache at mile 549 supplemented the water I’d treated from the Tylerhorse Creek — this would be a different trail without the caches, for sure. After a lunch break under the shade of a dead Ponderosa Pine with Thor the Hiking Viking and Ferntoe, I knocked out the last 9 miles of the trail to get to Tehachapi-Willow Springs Rd at mile 558. A mile or two before I got there, while hiking steadily down through the world’s largest wind farm, I spied a white truck at a road. My heartbeat accelerated — could it be Coppertone? This trail angel gives out root beer floats, and is generally amazing. I forced myself to not sprint the last part of the trail, in case it wasn’t him.

It was him. I inhaled a float, and a banana, in record time. Thank you, Coppertone!

Now, the main reason I was hiking fast that day was because… my husband Russell was coming to meet me in Tehachapi. We’d arranged for him to meet me at Hwy 58 at mile 566, but he was following me on SPOT, and when he realized I was at the closer road crossing, came there instead. I had just started walking away from Coppertone towards the road when I saw our car, and Russell, and that was that. The next 8 miles could wait until after our visit. 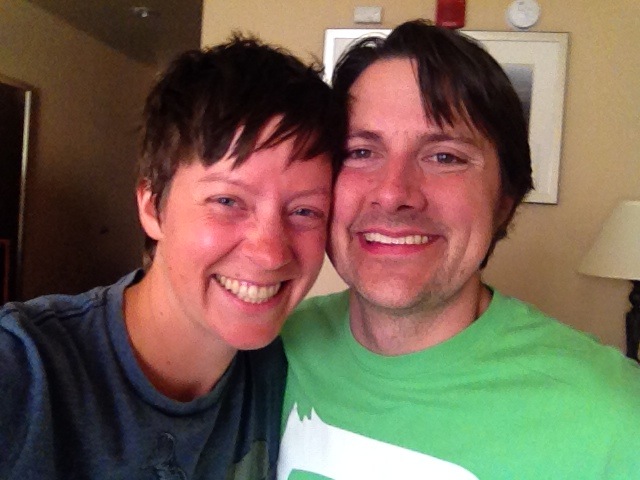 With Russell in Tehachapi.

We have spent the last two days in Tehachapi, catching up on sleep and each other. I’ve done laundry, bought food for the next section, eaten at least 4 large meals, and run into 6 or 7 other hikers. It’s been so great to see Russell after 5 weeks apart — the separation has been one of the hardest parts of the trail for me. Next time he joins me, we will hike a section together and he can smell and be dirty too.

From here, I head out to Kennedy Meadows and the start of the Sierra section (i.e. the end of the SoCal section). There’s snow at about 10.5-11k’ in the south Sierras, so I’m glad Russell sent my microspikes along with the bear barrel to KM. I’ll be trying for 10 days straight through to Vermillion Valley Resort (~190 miles including a Whitney summit side trip), so will be lugging a lot of food. Shorter days though — only 19-20 miles per day instead of the 25s I’ve been doing lately.

Thanks again for all your support and love. Big hugs to all, and happy trails wherever you are.