Setting up the tarp: knots, guylines, and poles, oh my

Between getting my teeth cleaned and another round of hiker errands yesterday, I took a timeout from rushing around and practiced setting up my tarp in a grassy park. 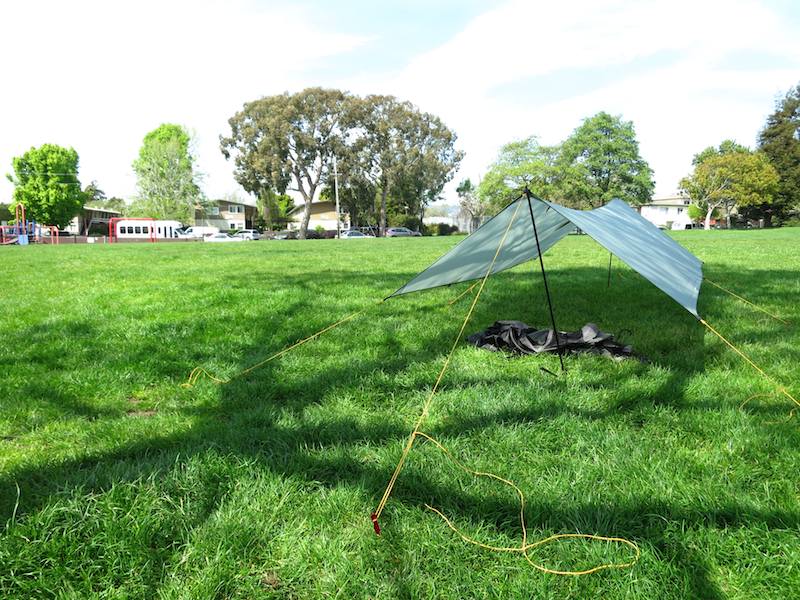 The tarp sheltering my pack and a whole lot of grass.

The tarp is a MLD Silnylon ProPoncho. With my 5’5″ height, it will double nicely as an excellent Gandalf the Grey costume for me some Halloween. 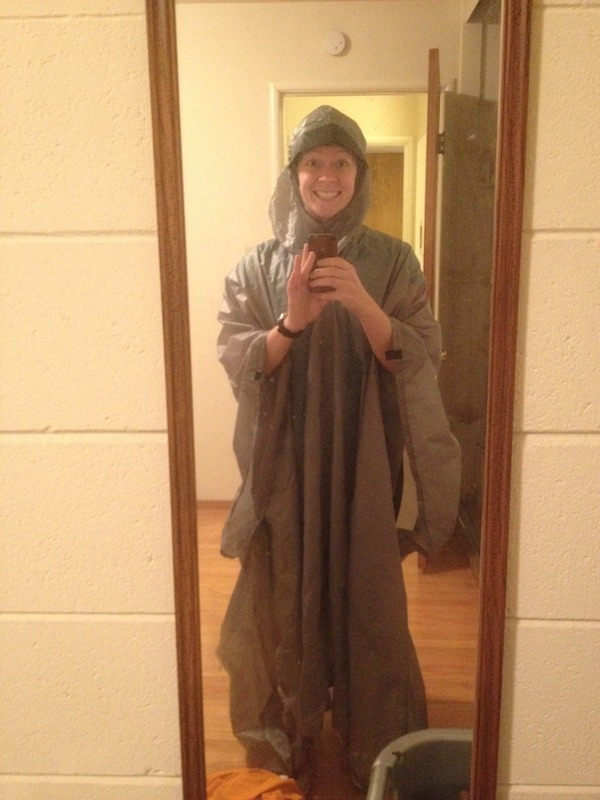 Gandalf the Grey costume or poncho? You decide.

Using Kelty Triptease guylines measured to my wingspan (two, one, or half), MSR Groundhog and Vargo titanium shepherd crook stakes, I set up A-frame and lean-to configurations. The catenary cut of the ridgeline made for a great A-frame and a decent lean-to, though the latter was not as clean. With trees to tie-out the center of the tarp, I suspect it would have been tauter. 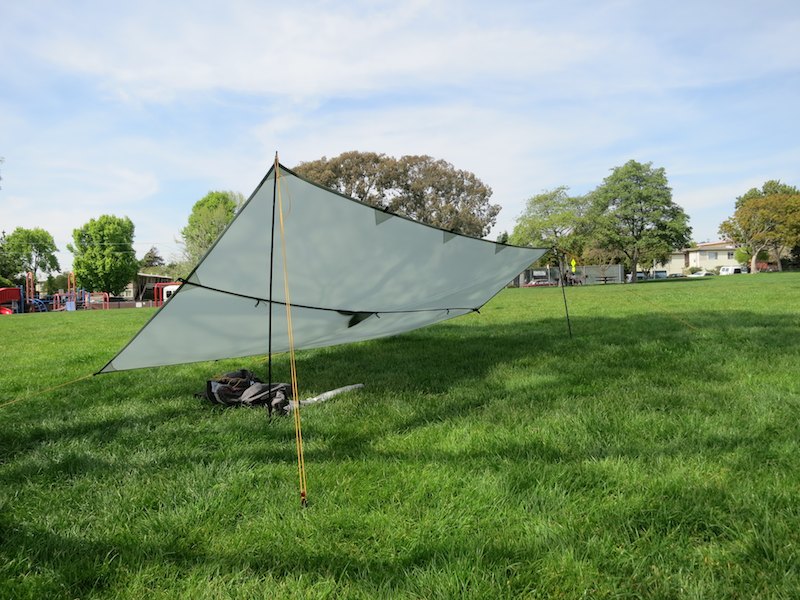 The 3.2 oz set of tarp poles I picked up from Gossamer Gear worked fine, fitting nicely into the grommets at each ridgeline. I think I was using the longer pole at the wrong end (twss?), because it seemed too tall. The umbrella worked just fine as a support as well. I think I’ll just be taking the taller pole and the umbrella.

Using recommendations from a few experienced tarp users, I tied bowlines to create a fixed loop at the end of each guyline, then hitched those loops to the tie-outs. I used taut-line hitches to pull the guys nice and snug; the one time I ran the line back up through the tie-out before tying the taut-line hitch (making a pulley), it was even easier to adjust. 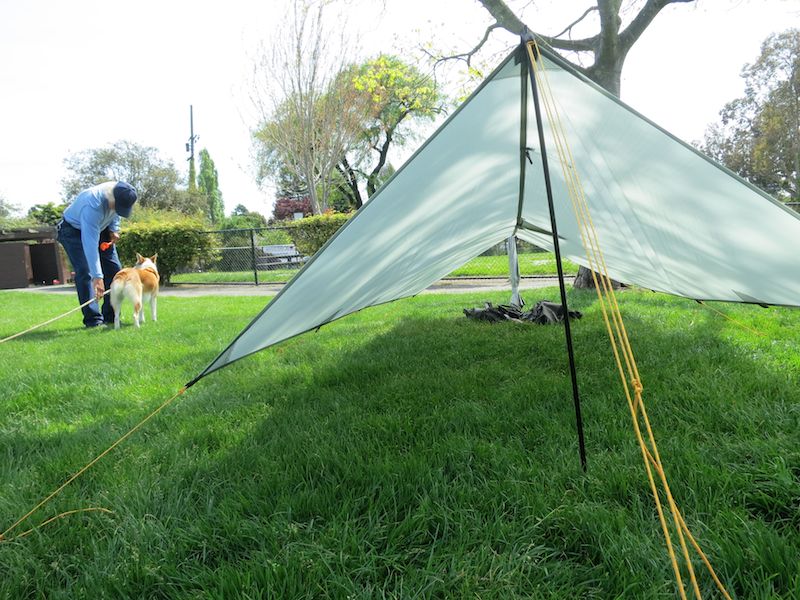 Guyline tied off with taut-line hitch via pulley. The umbrella is supporting the far end of the tarp. Super cute cattle dog / Akita mix named Pippin checking out the scene.

It was nice to see my fingers remembering how to tie the knots after learning them several weeks ago, practicing for a few hours, then not using them since (except that one time making a traction splint in WFR class).

I crawled under the tarp and hung out for a while. I didn’t want to leave. The last few days have passed in a blur of preparations and goodbye-for-nows — lying in the grass and watching kids play soccer (and a hula hooper, ’cause Berkeley) was a welcome break. 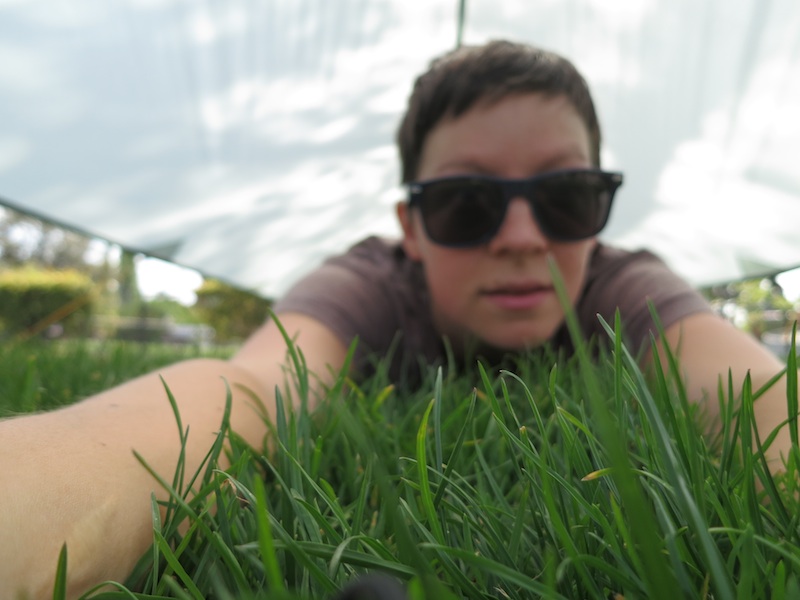 Chillin’ under the tarp in A-frame setup.

The space under the tarp felt palatial, again, possibly due to my relatively short statue. I considered requesting a custom order of a shorter tarp (Ron at Mountain Laurel Designs had been great with my custom pack order), but decided not to forego the extra space.

Taking it on the trail

While on the PCT, I plan to be sleeping out (cowboy camping) on clear nights. This shelter will be much appreciated on weather nights and days. 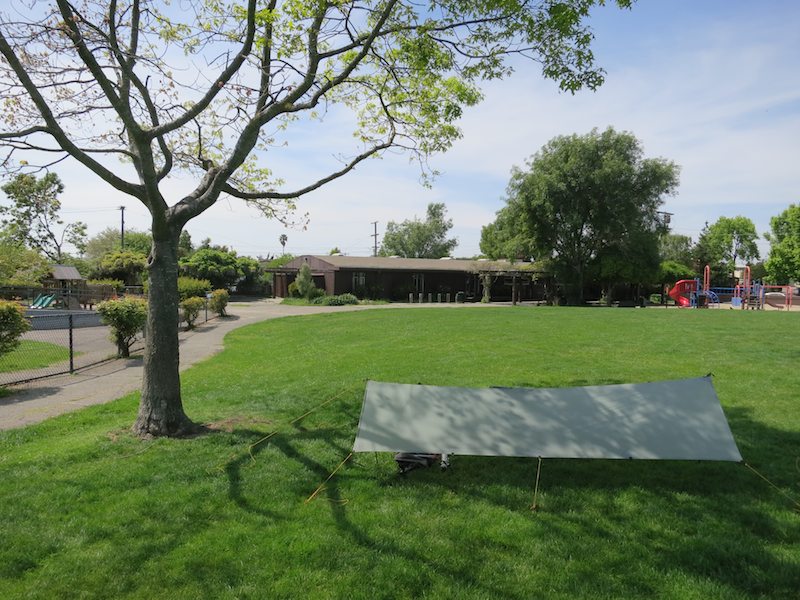 A-frame tarp setup from the side. One end (R) is wider than the other (L), and the ridgeline has a catenary cut.

On my last big hike, I used a fully enclosed tarptent — if I end up disliking the tarp, Russell will mail me the tarptent or my friend Aiko’s Six Moon Designs solo shelter.