My horribly chosen campsite by Purple Lake. Lovely and stupid.

I woke up around 6:30 and made it over to the cafe at 7. I ate a really nice, if overpriced, breakfast with the Mainers Andrew, Nell, & Sasha, and the late-50s couple Scott & Becky. I then bought a new fuel canister, a plum, and some baby powder to deal with the chafing from my shorts, at the general store, and took off. 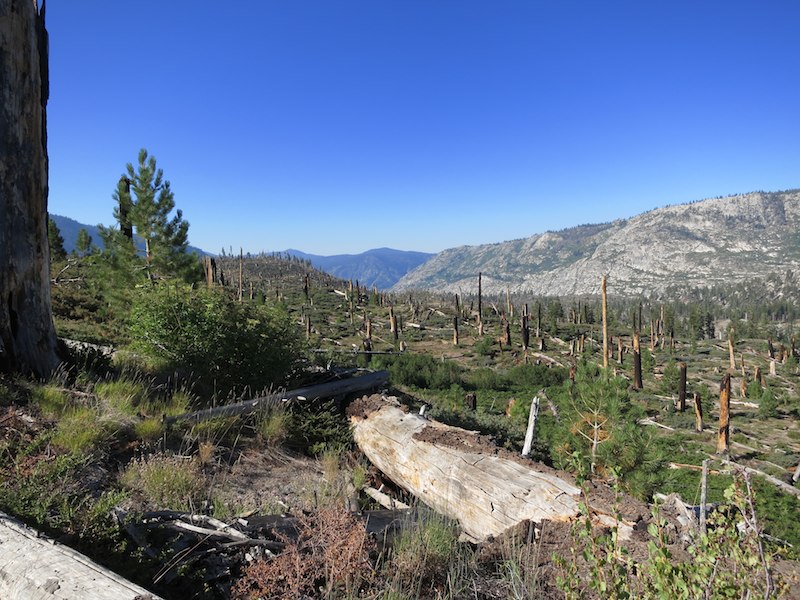 Trees snapped in half by a storm, past Red’s Meadow.

The walk was pretty easy today. Much of the morning was through fairly open forest, with many blow-downs from the big storm a few years ago. I saw a few deer close to Red’s, once while I was walking through a waist-high fern field. There were elderberry bushes in fruit along that section of trail. 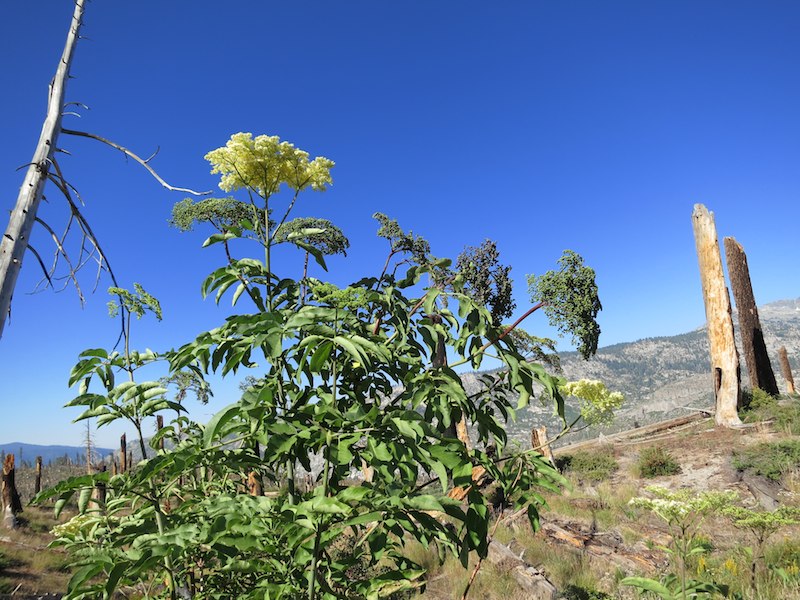 There was a gradual climb up 2500 ft over the course of the day, mostly along the Eastern side of a valley, I think Cascade Valley. The scenery didn’t change much, but I passed many mountains. The views took my breath away. 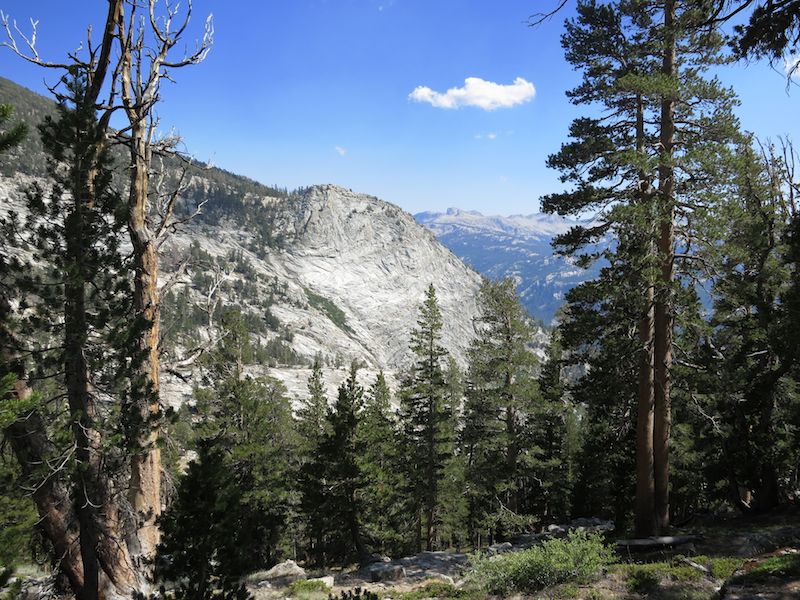 I walked near a couple of guys from SF for much of the day — Jesse & Stephen. I showed Stephen how to cinch his waist belt to take the load off his shoulders — he said later in the day that it had “changed his whole outlook on the hike” (for the better). He hadn’t planned much for this hike (ha – even less than me). Also met a couple of guys fly-fishing! And an older couple (trail names Time Check and Hiker 45) who have thru-hiked the whole PCT. Between the creek before Duck Lake & Purple Lake, I passed a group, and the woman in front noticed we had the same shoes, and hi-fived me. 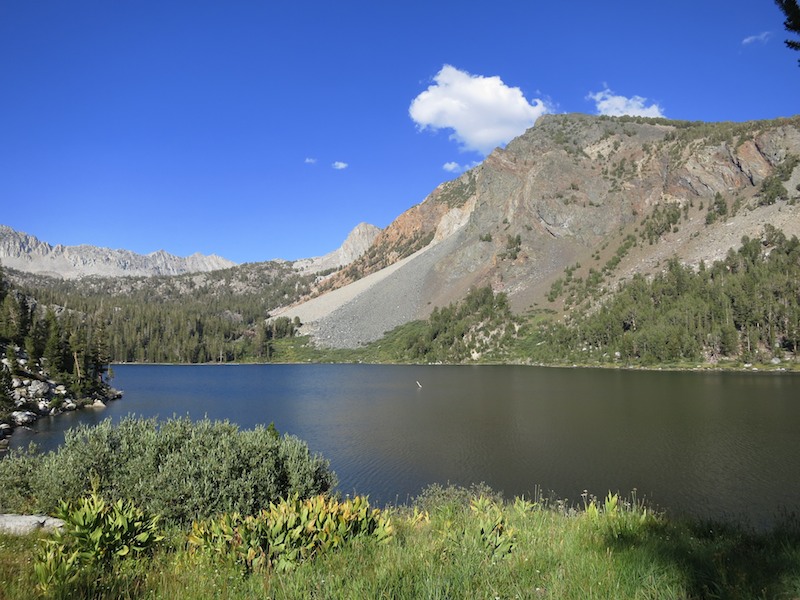 The multi-hued walls of Purple Lake in the evening.

I made it to Purple Lake to camp. I’m cowboy-ing again — hope it’s not below freezing. The lake is small, calm, and lovely, with steep sides that made finding a spot hard. I ended up taking an established site right by the lake edge. Not optimal. I went for a dip after setting up my sleep area — it was cold, but felt great. I doubt my bra will be dry before morning… It felt wonderful to lay on a rock in the sun to dry off.

I had potatoes & salmon for dinner, and ate it all. The new chocolate bar is much tastier than the old one, so I’m actually eating it. Right after leaving Red’s, I discovered that I’ve lost my map #9, which covered today’s hiking. Scott let me take a picture of his map, and Time Check gave me the relevant pages from his Eric the Black guide — so nice! My calculations of mileage don’t line up with Eric’s. According to Tom Harrison [map set], I walked 13.8 miles today, putting me at 74.2 JMT miles, while Eric puts me at 73.2. Oh well. 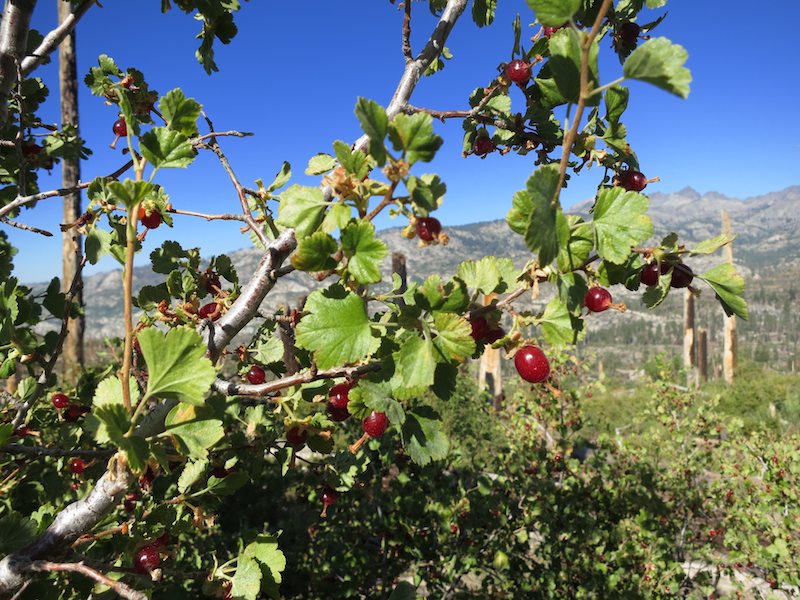 Lovely and delicious currants. These provided me fresh Vitamin C on the trail.

I think I’m going to get to MTR [Muir Trail Ranch] early, on the 12th. I may do some side trips to other lakes instead. I’m covering many more miles than I expected to, which feels really good.

I saw scat which was probably cougar, with lots of fur in it. Haven’t seen bear scat, or any bears.

Feet: the popped blister feels totally okay now. I put duct tape on the other pinkie (R), which is rubbing some but in general feels better. I put moleskin & duct tape over the heel abrasion. I also found a hole in the back of one of my smartwool socks. Connection? Still some soreness in my midfoot/arch areas on both feet, but not too bad

Body: good. legs are powering me up hills. no new sunburns 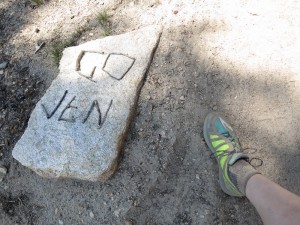 Sign made by fellow hiker supporting the Fastest Known Time attempt by Jenn.

* I saw a woman on the trail hiking really quickly. She stopped to chat, said she had the same shoes (for trail running). She is trying for a Fastest Known Time (FKT) on the JMT, going for 3.5 days! This is her 3rd attempt. Her name is Jen and she had a bat tattoo on her right forearm right by her elbow pit. She was walking the trail now to make sure the creeks had enough water. I think she said she’s starting from Whitney on Aug. 19th. I saw a sign made from rocks that read “Go Jen” a couple miles down the trail. She had green Patagonia shorts (bright green) and trail runners of some kind.

Also, two nights ago (Thousand Island), I felt pretty bummed & down. I looked through all my camera pictures, especially the ones of Russell. Red’s Meadow revived me, and I’m feeling very happy now.

An elite trail runner with a bat tattoo? Good thing I hadn’t yet read Christopher McDougall’s book “Born to Run“, or I would have recognized and fangirl-ed the incredible Jenn Shelton. Hard.

I only put two and two together a few weeks ago, when I checked out the barefoot running manifesto from the library. When I got to the section that described the young American runner who took part in the Copper Canyon race, my brain went, “wait a minute…”. I scrambled for my journal and found the part where I’d written about the runner, then stayed up ’til 4 AM finishing the book, so I could find out how she did.

Meeting Jenn, at the time as an anonymous yet clearly fantastic athlete, was inspirational — I would never have thought humans were capable of covering the distance in 3.5 or 4 days that I was covering in 20. Humbling doesn’t even begin to cover it.

The “Go Jen” sign was made by a hiker named Bruce I met a few days later. We kept talking about Jenn down the trail, hoping to see her on her FKT, but no one I talked to during the last few days saw her. Perhaps she passed us during the night? It looks like she didn’t set a new FKT in 2013 — best of luck to her on future attempts! 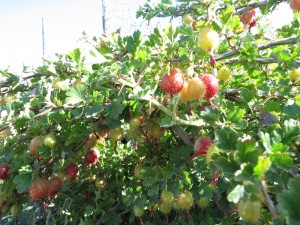 Helping Stephen with his pack was the first time I was able to pay forward some of the trail knowledge others had shared with me. In general on the trail I felt like Jon Snow — I knew nothing. The pack fit trick had been working for me though (buckle and/or adjust straps in this order: waist, shoulders, load lifters, sternum), and I was relieved when Stephen said it worked for him too. YMMV.

The map sharing was the first full-on trail magic that I experienced. Long distance hikers like to say that “the trail provides”, and man, it really did for me. Thanks again, Scott & Time Check! 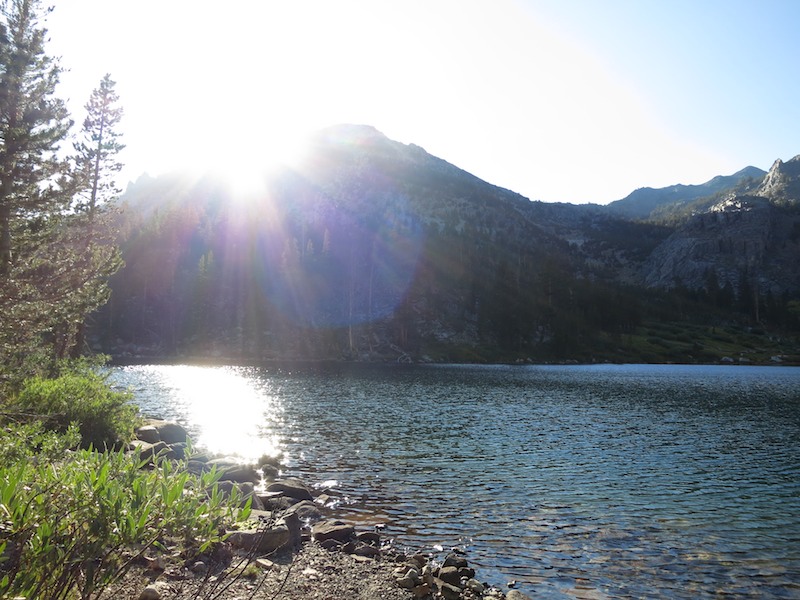 My horribly chosen campsite by Purple Lake. Lovely and stupid.

And oh, that campsite. *Shakes head.* “Not optimal”, my ass. That was the WORST.

It wasn’t just that I was in an illegal spot (highly impacted ie. “established”, but only 15 ft from the lakeshore), but that I was positioned to get All The Condensation off the lake during the night, at almost 10,000′, at the lowest point in a valley. It was a perfect recipe for freezing discomfort, and I ended up setting up my tent in the dark and moving into it. Grumble, grumble, live and learn.

On the plus side, I found a nice tent stake in the grass. Silver lining?